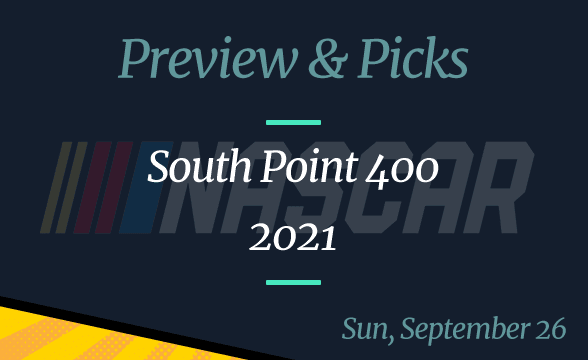 This weekend, NASCAR travels to Nevada, where Round of 12 of the NASCAR Cup Series takes place. The venue is Las Vegas Motor Speedway and the event in question is NASCAR: South Point 400.

There are only 12 drivers left in the competition for the NASCAR Drivers’ Championship after last weekend’s cut-off game knocked out such superstars as Kurt Busch.

All odds are per DraftKings as of September 24.

The regular-season champion and the current NASCAR points leader, Kyle Larson, is the #1 favorite to win the South Point 400. One of the reasons behind this is that he’ll be the one at the front of the pack at the start of the race.

He’s coming to Vegas after winning the playoff race in Bristol, which was his first win after the Go Bowling at The Glen. Thanks to that victory, he’s cemented his position at the very summit of the standings with 30 points more than Martin Truex Jr.

Can Someone Ruin Larson’s Plans?

Martin Truex Jr. needs to start winning if he wants to challenge Larson in the drivers’ classification. He surely has the skills needed for that, something she’s proven many times before. For instance, he’s the guy who won the Federated Auto Parts 400, which was the second race in Round of 16.

Furthermore, Truex also has good experience with racing in Vegas, having won the South Point 400 two years ago. The bad news for him is that oddsmakers don’t think he’ll do it again. The odds on him are +900, one of the reasons being that he’s starting the race from the #4 position.

Another driver who’s starting the race from way behind is Kyle Busch. Still, despite being the no. 10 in the starting lineup, the Vegas-born driver is the second favorite to win the race.

Then, there’s also Danny Hamlin, whom we saw doing well in several big events this year, including the Cook Out Southern 500, which he won a few weeks ago.

They’re all good drivers, meaning that no one would be surprised if one of them won the South Point 400. Still, Larson is the top favorite for a reason – he’s the best driver in NASCAR in 2021.