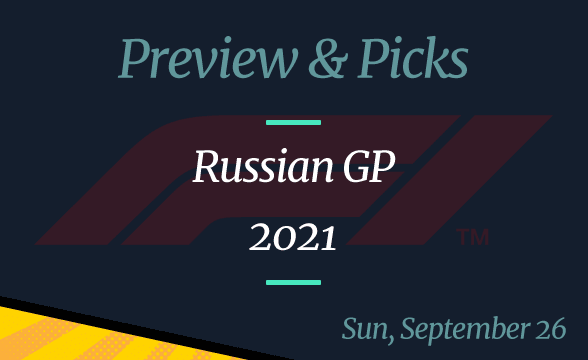 The 2021 season of the Formula 1 is slowly wrapping up, with eight more races left until the end. The one happening this Sunday in Russia is the penultimate European race in the F1 calendar. The Russian Grand Prix is an event that only Mercedes drivers have won the race so far – Lewis Hamilton (4), Valtteri Botas (2), and Nico Rosberg (1).

Winning the 2021 Russian GP is of utmost importance for Hamilton as he’s currently trailing behind Red Bull’s Max Verstappen by five points. What this means is that with a win on Sunday, the defending F1 champ would get back to the top of the Drivers’ Championship standings. The obvious question is will he do it?

All odds are per DraftKings as of September 24.

The odds suggest the 2021 Russian GP is going to be a battle between two Mercedes drivers. Hamilton is the #1 favorite, ahead of his teammate, Valtteri Botas. Next in line is Max Verstappen, who’s the current F1 leader when drivers are concerned.

The odds on the Dutchman are +600, which may seem a bit disrespectful toward the Red Bull Racing star. However, there is a reason why the odds are so long.

The story goes that Verstappen is going to have to serve a three-place grid penalty in this race. What this means is that in order to stand any chance against the two Mercedes drivers, he will need to be the best in the qualifying classification.

If he pulls it off, he’ll start the race from the third position. Not too bad you might think, but he’s won only one race this year while starting from the position on the grid (2021 Emilia Romagna Grand Prix).

Can Botas Surprise the Oddsmakers?

By winning the Russian GP, Lewis Hamilton would get to the top of the Drivers’ Championship rankings, regardless of how Verstappen do in the race. It’s because the race winner gets seven points more than the runner-up. The current points difference between the two is only five points.

The question is can Hamilton win the race even with Verstappen starting it from the #3 position? The Dutch driver isn’t the only one Hamilton should be worried about. In fact, online sportsbooks think his biggest rival in Russia is going to be his teammate, Valtteri Botas.

It’s not only because Botas is a phenomenal driver; it’s also because he seems to like racing in Russia. In fact, he’s the one who’s won the Russian GP in the previous season.

On the downside, Botas’ recent form isn’t that great. Actually, he’s still without a win in the 2021 F1 season, with his best performance happening in June at Styrian Grand Prix when he finished second.

One of the two gaming brands which had their operating licenses in Sweden revoked last month, Vivaro Gaming, will have its gambling permit reinstated following a ruling of the Swedish Administrative Court. License Reinstated Vivaro Gaming, BetConstruct’s European B2C subsidiary, had its license revoked by the Swedish gambling regulator Spelinspektionen in September, after it failed […]

TalkBanStop is a pilot launched for 12 months that aims at reducing gambling-related harms. Thanks to combining gambling exclusion tools and trained advisers, the pilot aims to help people who have felt problem gambling. A New Pilot Campaign Is Making Positive Impact GamCare, Gamban and GAMSTOP all collaborated to launch TalkBanStop. The innovative pilot offers […]

Gibraltar-based online sports betting and iGaming company Mansion Group announced its MansionCasino brand successfully launched operations in Spain, while the group’s other brands are expected to become available in the country in the future. Launch in Spain The launch of Mansion Group’s online casino brand MansionCasino took place after the brand received an operating license […]

James Browne, Ireland’s Minister of State at the Department of Justice, has unveiled new regulatory rules for the country’s gambling market. According to the Ministry, this much-needed change is needed to modernize the outdated local gambling laws. The Responsibilities of the New Authority Under the new legislation, Ireland will form its first-ever gambling regulator who […]

1xBet might have legitimate operations around the world, but it isn’t welcome in Russia. That hasn’t stopped it from operating there, however, and some of the online gaming platform’s in-country operators have found themselves on the wrong side of the law. One has now been found guilty and yesterday learned her fate. 1xBet Entrepreneur Avoids […]