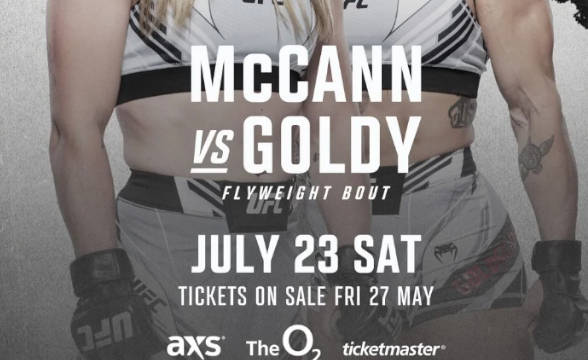 The only fight with female MMA fighters that’s on the main card of UFC Fight Night 208 is the duel between Molly McCann (12-4) and Hannah Goldy (6-2). It’s a clash in the UFC women’s flyweight division, in which neither McCann nor Goldy is ranked.

However, it’s very likely that the winner of this bout will get among the Top 15 in the division. So, who’s it going to be? Keep reading our McCann vs Goldy preview to see what we predict.

All odds are per FanDuel as of July 19.

Molly McCann is 12-4 in her career, which kicked off in 2015 in an event called Shock N’ Awe in her native England. After fighting in MMA tournaments organized by several other local promotions, she inked a deal with Cage Warriors, which is the first milestone of her professional journey.

She made her CW debut in 2017, adding two more wins a year later, the final of which brought her the Cage Warriors Women’s Flyweight Championship belt. The win put her on the radar of the UFC, with which she signed a contract shortly after winning the title.

Her UFC debut started with a loss to Gillian Robertson on May 27, 2018. Since then, she’s fought another seven fights, winning five of them. Two of those wins happened in McCann’s previous two outings.

First, she defeated Ji Yeon Kim in September (by unanimous decision) in a bout that the UFC officials declared the Fight of the Night. Next came the clash with Luana Carolina at UFC Fight Night 204 in London. McCann finished the opponent with a spinning-back elbow knockout, for which she earned the Performance of the Night bonus.

Four months after that fight, she’s coming back to London to fight again. Are we going to see her impress again?

Hannah Goldy Praying for a Miracle

The 30-year-old American is 6-2 in her professional career, with one win and two losses since coming to the UFC. What’s interesting is that throughout her career, which started six years ago, she’s been switching between strawweight and flyweight divisions. In the 115 lbs division, she’s 2-1 while in the 125 lb weight class, she is 4-1.

Her most recent bout was a strawweight bout, in which she defeated Emily Whitmire by submission (armbar) in Round 1. It was an impressive performance, but there’s a caveat – she fought against a mixed martial artist who was 4-4 before that fight.

This Saturday, she’s got a much harder challenge. Goldy is going toe-to-toe with a fighter who’s bigger, stronger, and more experienced than her. Knowing this, it’s no surprise that Goldy is seen as a huge underdog at UFC Fight Night 208.

Anything but an easy win for McCann would be a huge shock. By “easy” we mean a win inside the distance. Knowing that Molly has won five fights by knockout and zero fights by submission, KO/TKO seems like the method she’s going to use to end Saturday’s fight.