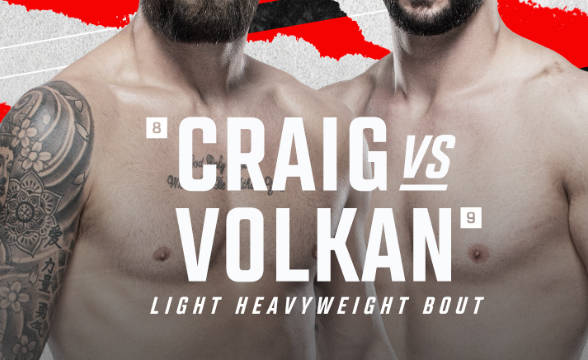 Paul Craig (16-4) and Volkan Oezdemir (17-6) lock horns this coming Saturday in London’s O2 Arena in a light heavyweight fight of UFC Fight Night 208. Oezdemir, who is a former title challenger is seen as the favorite.

This may come as a bit of a surprise to some, knowing that even though the Swiss fighter has an impressive pedigree, it’s Craig who’s been getting into the headlines recently. The Scottish mixed martial artist is without a loss in six fights, winning the Performance of the Night bonus for four of those bouts.

All odds are per FanDuel as of July 19.

Paul Craig’s career started in 2013, while three years later he signed a deal with the UFC. Since then, he’s fought against some really good fighters, beating some and losing to some. Still, in the last three years, he’s been nothing short of impressive.

Craig has no losses since 2019, with a submission win over Vinicius Moreira marking the start of his unbeaten run. In the following fight, he drew with Mauricio Rua but then went on to win the next four bouts – including a rematch with Rua.

In his most recent outing, Craig defeated Nikita Krylov by submission, for which he got the Performance of the Night bonus from the UFC. It happened on March 19 at UFC Fight Night 204, which took place at The O2, the same venue that will host Saturday’s event.

That said, it’s very likely the Scottish fighter will have fans by his side. They will do all they can to help him get to the 17th win of his career, which would almost certainly lift him a few spots higher in the UFC light heavyweight rankings. As a reminder, Craig is currently eight, but a win on Saturday could pave the way to a title fight in a year or two.

Volkan Oezdemir Hoping to Get Back onto the Winning Track

Oezdemir has lost only six fights in his 12-years-long career. What’s worrying is that five of those six defeats happened in his previous seven fights. The worst thing is that he’s coming to London after back-to-back losses.

His most recent trip to the octagon ended up with him losing to Magomed Ankalaev by unanimous decision. Oezdemir lost to a fighter whom Craig defeated by submission in 2018.

The Swiss fighter might not be surging, but we mustn’t forget that he’s a former UFC Light Heavyweight Championship challenger. He fought for the title in January 2018 against Daniel Cormier who beat him in Round 2 by TKO.

Even though Craig is two years older than Oezdemir, we think that his time is coming. If Craig continues fighting the same way he’s been for the past couple of years, he might get a title shot in 2023. Oezdemir, on the other hand, looks like someone who’s past his prime.