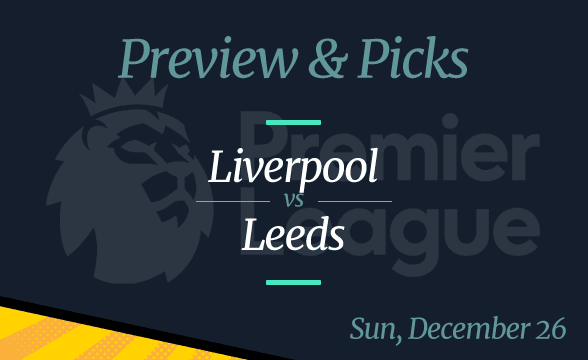 One of the most interesting fixtures of the Premier League Boxing Day round is the one between Liverpool and Leeds. Knowing that Liverpool’s been in a sensational run and that Leeds’ has been horrible lately, it’s obvious who the favorite is.

The Reds are undefeated in nine games and have scored at least a goal in each of their previous 33 games. Meanwhile, Leeds has been breaking negative records – this team’s lost the previous three games, conceding a total of 14 goals along the way.

When it comes to the Liverpool vs Leeds game, the main question isn’t who’s going to win. Instead, it’s whether we’re going to see a lot of goals.

All odds are per FanDuel as of December 20.

Liverpool to Bounce Back After a Draw With Tottenham

Playing a draw with Tottenham in London doesn’t seem too bad, but Liverpool wanted more. Before drawing with the Spurs, this team was on a super run with eight straight wins – two in the Champions League and six in the Prem.

They failed to beat the Spurs even though they had a 2-1 lead at one point. As a result, the surging Manchester City has managed to increase the point game between the two. The Sky Blues are sitting at the top of the Premier League table with three points more than the second-placed Reds.

To keep up with Man City, Liverpool needs to start winning again. The bad news for them is that some of their players are struggling with fitness, while some have tested positive for COVID-19. The good news is that most of them should return by Boxing Day.

Marcelo Bielsa’s Boys to Pull Themselves Together?

Leeds’ manager Marcelo Bielsa still isn’t in the hot seat. It seems that the directors still have faith in him even though his team’s lost the previous three Premier League games. Losing three in a row might not seem that bad, but Leeds’ got obliterated in two of those.

On December 14, Leeds suffered one of the most humiliating defeats in the club’s history. They lost 7-0 to Manchester City. Just four days later, Arsenal beat them 4-1. Eight days later, Leeds players are facing another tough challenge. They’re taking on a team that’s scored more goals than any other team in the Premier League.

Does this mean another blowout loss is on the way for Bielsa’s boys? Such a scenario seems very likely. It’s not just because of their poor form or the fact that Liverpool’s attackers have been sensational. It’s also because a number of Leeds’ players are struggling with injuries, including their key men Kalvin Phillips, Patrick Bamford, and Liam Cooper.

It’s still unclear whether any of them will make a comeback in time for the Boxing Day game. Still, even if they do, they probably aren’t going to be able to do much against mighty Liverpool. After all, they lost to the Reds 3-0 in their previous duel, which took place in Leeds. This time, the two are locking horns at Liverpool’s Anfield.

Picks: Liverpool to win; Over 3.5 goals