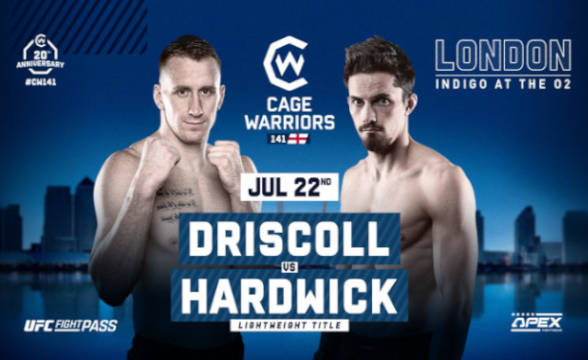 Irish MMA promotion Cage Warriors is celebrating its 20th birthday with an event held in the O2 Arena in London, UK. The event in question is Cage Warriors 141: Driscoll vs. Hardwick, named after its headliner bout which will decide the new CW lightweight champion.

So, who’s going to get ahold of the vacant title – Kyle Driscoll or George Hardwick? That’s the question we’ll try to answer in our Cage Warriors 141 preview.

Born in Oklahoma, Kyle Driscoll is a 28-year-old American MMA fighter who’s 13-3 in his professional career. All three of his losses happened relatively early on in his career, while he’s undefeated since November 2017.

Driscoll is looking for his eighth straight win, which would not only bring the CW lightweight title his way but would also put him on the UFC radar. Actually, he’s been in the UFC discussion for a long time, especially after doing well in Dana White’s Contender Series in 2020.

Even though he defeated Dinis Paiva by unanimous decision, he didn’t get a contract offer from Dana White’s company. Instead of moving to the UFC, he inked a deal with Cage Warriors. In March this year, Driscoll made his promotional debut, defeating Joshua Jones by unanimous decision.

The win served as evidence that he’s one of the best fighters in the Cage Warriors lightweight division, which is why he was given a shot at the title. The title bout on Friday, however, is going to be one of the hardest fights of his entire career.

Born and raised in Middlesbrough, England, George Hardwick is going to have the fans on his side on Friday. It’s not just because he’s an Englishman, it’s also because he’s one of the most promising fighters currently fighting in this promotion.

Hardwick’s overall record is 10-1, with his only loss happening in his Cage Warriors debut in 2019 when he lost to Madars Bertholds-Fleminas by unanimous decision. The loss prompted him to move to Bellator MMA, where he won two fights in a row before deciding to try himself in Cage Warriors once again.

In summer 2021, Hardwick made his return to Cage Warriors, winning the next three fights. In each of those fights, he won within the distance (two by KO/TKO and one by submission).

Our pick for the Cage Warriors 141 headliner is George Hardwick. Even though the betting odds suggest otherwise, we think he’s going to win on Friday.

There are several reasons for that, starting with the fact that his recent performances were nothing short of brilliant. Further, he’s fighting on his turf, with the O2 crowd almost certainly being on his side.