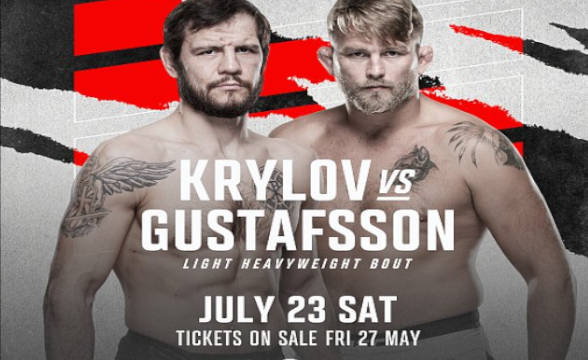 The main card of UFC Fight Night 208 is packed with exciting bouts. Take a look at the Nikita Krylov vs Alexander Gustafsson fight, for example, which pits two fantastic Light Heavyweight fighters, both of whom are determined to show the world they belong among the elite.

This goes especially for Gustafsson, a fighter who’s fought three title bouts in his career but failed to get ahold of the championship belt every time. He’s coming to the octagon after a two-year hiatus to fight against the #11 in the UFC light heavyweight rankings. If he wins, the 35-year-old Swede could open the door to much bigger bouts in the next year or two.

Unfortunately for Gustafsson, online sportsbooks don’t think he’s going to win. Instead, the betting odds are heavily favoring his opponent. Krylov is coming to London as a -210 favorite, but judging by his recent couple of UFC performances, bookies might be wrong to think so.

All odds are per FanDuel as of July 18.

Should Nikita Krylov Be the Betting Favorite?

Nikita Krylov is 27-9 in his professional career which started back in 2012. After winning 12 fights in a row in several different Ukrainian and Russian promotions, Krylov put himself in the spotlight of the MMA community. After a few more fights, he landed a UFC deal in 2013.

His UFC career didn’t start great as he lost on his debut. He then bounced back, winning six of the following eight fights. Still, that wasn’t enough to persuade the UFC bosses to extend his deal, which is why he returned to Eastern Europe.

He then won four straight fights in Donbass Association of Combat Sports and Fight Nights Global, which made the UFC interested in him again. In September 2018, Krylov made his UFC return, fighting against Jan Blachowich in his second debut in the promotion.

Again, his debut was unsuccessful. The Polish fighter beat him by submission. A few months later, Krylov got back to the winning track, beating Ovince Saint Preux by submission in April 2019. In September of the same year, he lost to Glover Teixeira, while his only fight of 2020 saw him beat Johnny Walker.

Since then, he’s fought another two fights, losing each time. First, he lost to Magomed Ankalaev by unanimous decision in February 2021; then, he lost by submission to Paul Craig in March 2022. Knowing all this, it’s really strange that Krylov is seen as the odds-on favorite in Saturday’s bout. His record isn’t bad, but it’s nowhere near as impressive as Gustafsson’s.

The 35-year-old Swede is 18-7 in his pro career with six of those losses happening in his previous nine bouts. This fact is probably the reason why oddsmakers think of him as the underdog in the fight at UFC Fight Night 208. His run isn’t great, but there’s a caveat – three of those losses happened in title bouts.

He lost the title fight to UFC GOAT candidate Jon Jones on two occasions. His third attempt was ruined by Daniel Cormier, who’s another legendary fighter with a fantastic record. That said, losing those fights isn’t something he should be ashamed of. But what about his other losses?

Well, Gustafsson is without a win since 2017, losing his previous three fights. His most recent fight was a heavyweight clash which he lost to Fabricio Werdum by submission in July 2020. Since then, he hasn’t fought a single MMA bout.

Is it time for Gustafsson to make a big comeback? We think it might be. Even though he hasn’t fought in years, he isn’t too old for UFC standards. At the age of 35, the Mauler probably still has it in him.