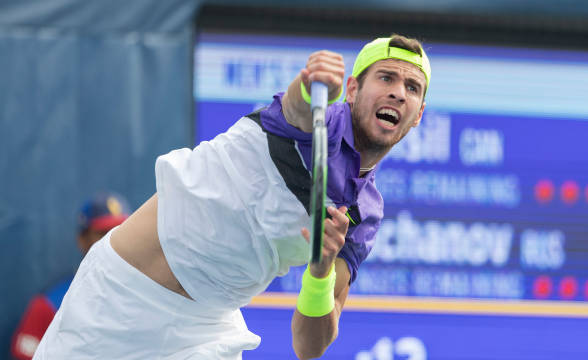 The US Open men’s singles tournament is going to get a first-time champion as none of the previous winners has made it to the semifinal stage. That said, you can be sure that all four players still in the contest will go above and beyond to win the trophy.

According to oddsmakers, the current no.1 favorite to win the 2022 US Open is Carlos Alcaraz, who’s expected to beat Frances Tiafoe in the semifinal. In the other semifinal duel, things might get even more exciting when Karen Khachanov and Casper Ruud go onto the court.

Casper Ruud is favored to advance to the US Open final, but Karen Khachanov has already shown he knows how to upset the odds. He’s coming off a 3-2 win over Nick Kyrgios who was a -500 favorite before the match.

Can he cause another upset? If you want to see what we think on the subject, just keep on reading this Khachanov vs Ruud preview.

All odds are per FanDuel as of September 7.

The 26-year-old Russian was sitting in the #31 position in the ATP Rankings before the start of the 2022 US Open. This explains why oddsmakers saw him as an underdog in each of his previous three matches.

He was a +120 underdog in the match against Jack Draper, but the Englishman had to retire due to a thigh problem. In the round of 16, Khachanov was a +175 underdog against Pablo Carreno-Busta, but he ended up winning 3-2.

Then, in the quarterfinal of the 2022 US Open, he was given the odds of +350 against Nick Kyrgios. Three hours and 41 minutes after getting on the court, Khachanov won the match 3-2 in sets.

Once again, he’s seen as an underdog against a player with whom he’s played just once so far. It happened back in 2022 at ATP Rome, a tournament that’s played on clay. His first-ever hardcourt clash with Ruud is going to be played on Friday, September 9.

The world no. 7 is coming off a 3-0 win over Matteo Berrettini in the US Open quarterfinal. Ruud was nothing short of brilliant in that match, starting with a 6-1 win in the first set. He won the second set by 6-4 in games, while the decisive set went to the tiebreaker.

Even though Berrettini played his best tennis in the third set, Ruud showed he can keep his composure when needed. As a reminder, Berrettini went 5-2 in games in Set 3, but Ruud then bounced back, taking the set to the tiebreaker which he then won 7-4.

The match with Berrettini saw Ruud’s best performance in the 2022 US Open. However, before that win, he didn’t do that great. Even though he played against weaker opponents in the first four matches of the tournament, we did see him struggle. For instance, in Round 2, it took Ruud four hours and 23 minutes to beat underdog Tommy Paul.

This is going to be a fantastic match! Both players are determined to give their utmost on Friday, meaning that we’ll probably see a long fierce battle. We expect to see at least four sets, with Ruud probably getting the win in the end.