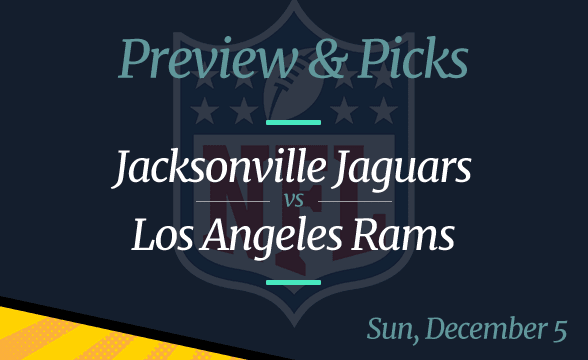 The Los Angeles Rams are currently 7-4, with three of their four defeats happening in their previous three games. As a result of their poor form, they’re no longer among the top Super Bowl favorites. In fact, unless they get back to their winning ways soon enough, there’s a possibility they could end up missing the playoffs.

Luckily for them, their schedule is about to get easier. In Week 13, they’re taking on one of the worst teams in the AFC, the Jacksonville Jaguars (2-9). Winning this game is a must for the Rams, not just for their postseason efforts but also for their morale. After losing three games in a row, getting a blowout win would certainly put the smile back on their players’ faces.

All odds are per FanDuel as of November 30.

The Jaguars are 2-9 on the season, which is far from impressive, but is still better than what they did in 2020. Last season, they won just one game. Unfortunately for the Jags, this could be their maximum. The chance of getting to the postseason is very low, especially because their schedule is about to get ugly.

They have some pretty tough games before the end of the regular season, probably the most challenging being the one taking place on Sunday. The reason is that the Rams have some fantastic players on their defensive team, meaning that the Jags’ offense is in trouble.

Jacksonville has scored only 173 points in 11 games played so far in the 2021 season, which is the second-worst in the NFL.

It’s Time for the Rams to Start Winning Again

The Rams are coming off three straight losses. Sounds horrible for a team with such player quality; however, there’s an explanation behind all this. Their schedule was horrible in the last couple of weeks. The three teams they lost to are the Tennessee Titans, San Francisco 49ers and Green Bay Packers.

The good news for the Rams is that their next opponent is one of the worst teams in the league. They have a fantastic record against this opponent, having won five of their six meetings. Further, the Jags look like a team the Rams love playing against.

The LA franchise is superb in the defense, even though their recent outings suggest otherwise. However, with players like Aaron Donald (defensive end) and Jalen Ramsey (cornerback), the Rams defense looks capable of dismantling all of the Jaguars’ offensive weapons.

On top of that, they also have a fantastic offense, which is averaging 27.2 points per game, which makes them the 8th best in the league. That said, anything but a blowout win for Los Angeles would be a major surprise.

Picks: Los Angeles Rams to win and cover the spread; under to hit.

BetMakers Technology Group, a provider of odds comparisons, intelligent betting platforms, analytics, and trading solutions, has announced that it has signed an amended odds and data distribution agreement with Darby Development and the New Jersey Thoroughbred Horsemen’s Association. Darby Development Is Sure BetMakers Will Take Horseracing to the Next Level The renewed deal will see […]