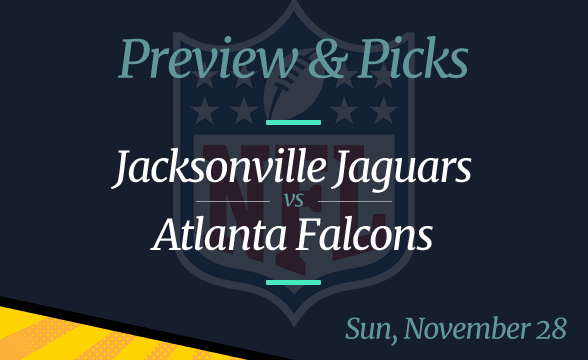 In Week 12, the Atlanta Falcons (4-6) travel to Florida to take on the Jacksonville Jaguars (2-8) on Sunday afternoon. Both teams are coming off two straight losses, which made their playoff efforts almost completely futile. Although both still have a theoretical chance to get to the postseason, such a scenario is very unlikely.

This, of course, doesn’t mean they’ve already given up. On the contrary, you can expect a big battle at TIAA Bank Field this weekend.

All odds are per FanDuel as of November 24.

Falcons Offense Needs to Step Up

In the previous two games, the Falcons scored a total of only three points. First, they got obliterated by the Dallas Cowboys 43-3; then, the Patriots blew them away 25-0. The man the fans are blaming is their quarterback, Matt Ryan. The 36-year-old QB got two of his passes intercepted in each of the previous two games.

Still, Ryan’s performances wouldn’t be so horrible if his offensive teammates were playing better. He simply hasn’t been getting enough protection. On top of that, the Falcons receivers just seem unable to separate, which is why he’s been focusing most of his throws to rookie tight end Kyle Pitts and utility player Cordarrelle Patterson.

On the bright side, Ryan and his teammates have a chance to improve their game on Sunday when they’re taking on one of the league’s worst defenses.

Jaguars Looking for Their Third Home Win of the Season

The Jags have two wins this season, which is two times more than what they did in the 2020 season. Both of those wins happened at TIAA Bank Field in Jacksonville. The first one was a win over their interstate rivals, the Miami Dolphins. The score was 23-20.

The second win happened against the favored Buffalo Bills, with the final score being 9-6. Obviously, the Jags’ defense did fantastic in those games. Their offense hasn’t been too impressive, but we did see some signs of improvement.

Rookie quarterback Trevor Lawrence can’t be too proud of his 2021 stats, but the guy surely has the talent to lead this team to glory in the future. In the meantime, their most dangerous offensive player is James Robinson, a running back who’s already scored seven touchdowns.

Robinson scored one TD in the Jag’s previous game, even though he probably wasn’t 100% fit that day. The thing is that he was struggling with a heel injury in the days heading into Week 11. Now that he’s healthy, he seems like the one who could wreak havoc on the Falcons defense. This goes especially because the Falcons are one of the worst teams in the NFL when it comes to yards allowed per game, with 123.3 on average.

Picks: Atlanta Falcons to win; under should hit.