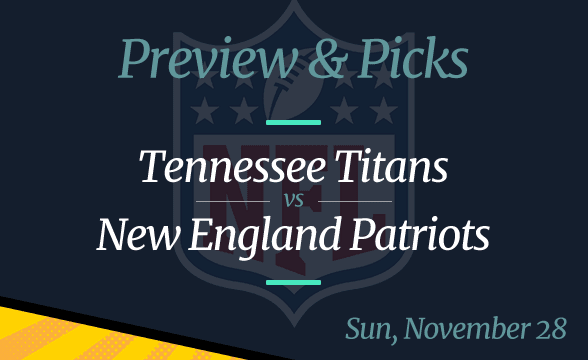 The Tennessee Titans (8-3) are at the top of the AFC rankings, but that might not last for too long. It’s because, in Week 12, they’re traveling to Foxborough to take on the surging New England Patriots (7-4). Bill Belichick’s team is seen favored by 5.5 points to win against the Titans, the main reason being that the Pats are who are without a loss in five games.

All odds are per FanDuel as of November 24.

Titans Could Be in Trouble

The Titans have a fantastic record in 2021, but most of their best performances this season happened when their best player Derrick Henry was injury-free. However, since suffering a season-ending injury in Week 8.

They destroyed the LA Rams a week after Henry’s injury, but then, they started to struggle. Their next game saw them winning against the New Orleans Saints by just two points. Then, last Sunday, they suffered their most humiliating defeat of the season. They lost to 22-13 at home to the Houston Texans, one of the worst teams in the NFL.

A week later, they’re taking on one of the best teams in the league, which has been playing superb football in the last couple of weeks.

After going 1-3 at the start of the season, the Pats switched into high gear. They then went 6-1, with their only loss happening in overtime against the Dallas Cowboys. Further, they’re without a loss in the previous five games.

The most impressive fact about the Pats’ recent performances is that their defense was superb – they conceded only 13 points in the previous three games.

Apart from having a superb defensive team, the Pats have also been great offensively. In the second season without Tom Brady as their quarterback, the offense has scored 300 points in ten games. What this means is that they have a better scoring average than any other team in the AFC.

Their rookie quarterback, Mac Jones, has been fantastic thus far, passing for 2,540 yards in 11 games with a passing completion of 70.2. The 23-year-old has already made 14 touchdown passes on the season. The most interesting fact is that 13 of his TD passes happened at Gillette Stadium, which is where the Week 12 game against the Titans will take place.

Pick: New England Patriots to win and cover the spread; under should hit.