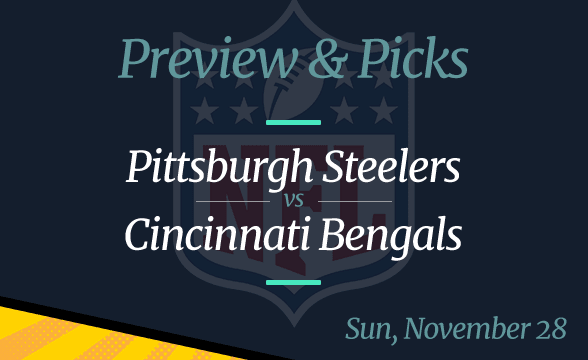 The Pittsburgh Steelers (5-4) travel to Ohio this weekend to take on their AFC North rivals, the Cincinnati Bengals (6-4). Both teams still have a chance to get to the playoffs, either by winning the division or through Wild Card.

The game on Sunday is their second clash of the season; the first one saw the Bengals winning 24-10. Oddsmakers think the same might happen, but history teaches us that the Steelers haven’t lost both games in a season since 2009. Knowing all this, we can only assume the Steelers vs Bengals game is going to be an exciting one.

All odds are per FanDuel as of November 23.

Bengals Back on the Winning Track

After losing two straight games, the Bengals ended their losing streak in Week 11 with a win over the Las Vegas Raiders. What has to worry them is that their schedule is to get much tougher real soon. Until the end of the season, they will have to take on such heavyweights as the Baltimore Ravens, Kansas City Chiefs and Cleveland Browns.

This is why winning in Week 12 is a priority for the Bengals if they wish to stay in the battle for the playoffs. Not only would winning on Sunday improve their ranking, but it would also help their effort to eliminate one of their AFC North rivals out of the postseason race.

They surely have the manpower to do so. Their players are better than those playing for the Steelers, especially when it comes to the offense. Evidence of this is that the Bengals have scored the most points of all the teams in the division. Their average is 26.8 points per game and we could see that number going up in Week 12 when they’re taking on the banged-up Steelers defense.

Steelers Having Problems With Injuries

The Steelers are without a win in the previous two weeks. First, they tied with the Detroit Lions 16-16. Then, they lost to the Los Angeles Chargers 41-37.

The poor performance of the Steelers shouldn’t surprise anyone who’s aware of their defensive issues. The thing is that several of their key defensive players have been struggling with injuries over the past couple of weeks. Some of those include T.J. Watt, Joe Haden, Isaiah Loudermilk and so on.

Apart from having problems with injured players in their defensive team, the Steelers will probably be without a couple of their offensive players. The most notable absentee is Chase Claypool, a wide receiver who’s struggling with a toe injury.

Without so many important players, the Steelers’ chances of winning in Week 12 do not look very good. In fact, it seems they’re heading for another loss.

Picks: Cincinnati Bengals to win and cover the spread; the over should hit.

FansUnite Spearheads Into the US Market With American Affiliate Acquisition