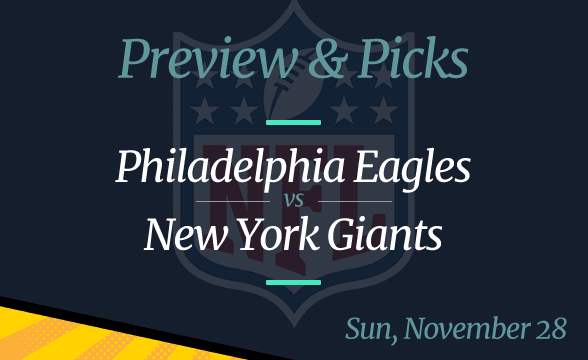 The New York Giants are 3-7 on the season, but still have a theoretical chance to win the NFC East. However, their hopes could end if they lose to their divisional rivals, the Philadelphia Eagles, on Saturday afternoon.

Meanwhile, the Eagles have a 5-6 record, which is two wins fewer than the Dallas Cowboys, the table leaders in the NFC East. Even if they miss the top position, they could still challenge a Wild Card berth. For either scenario to happen, they need to continue playing well, which implies that a win in the Eagles vs Giants game is a must.

All odds are per FanDuel as of November 25.

The Eagles are coming off back-to-back wins, which saw their offense blowing the opposition away. They scored a total of 70 points in those two games. First, they beat the Denver Broncos 30-13 in Colorado. Then, they destroyed the New Orleans Saints 40-29 at home.

Their second-year quarterback, Jalen Hurts, has started putting on some pretty decent performances. He did get sacked five times in the previous two games, which shows that his teammates haven’t been giving him enough protection.

He still managed to make plenty of passes, most of which were caught by rookie receiver DeVonta Smith, who already has four receiving TDs to his name in 2021.

With 189 points scored in ten games, the Giants have one of the worst offenses in the league. This season, they haven’t scored 30+ in any game. In fact, the last time they did was back in October 2020.

Their passing has been okay, with their quarterback Daniel Jones making nine TDs so far. The Giants’ running game, however, hasn’t been that great. With 0.7 rushing TDs per game on average, they’re among the worst teams in the NFL.

One of the reasons for that is that their Pro Bowler RB Saquon Barkley has been struggling with injuries in 2021. He did play last weekend, but it’s possible we’ll see him missing the Eagles vs Giants game due to an ankle injury.

What all this means is that if the Eagles manage to stop the Giants’ passing play, they will win easily. Even if they don’t, their offense looks capable of outscoring the opponent.

Picks: Philadelphia Eagles to win and cover the spread; over should hit.

British international Internet-based market research and data analytics firm YouGov has posted a quarterly report about the state of the US gambling market. According to YouGov, the industry is facing one of its biggest threats yet in the face of the rising costs of living which may affect casinos in the country. YouGov Analyzed the […]