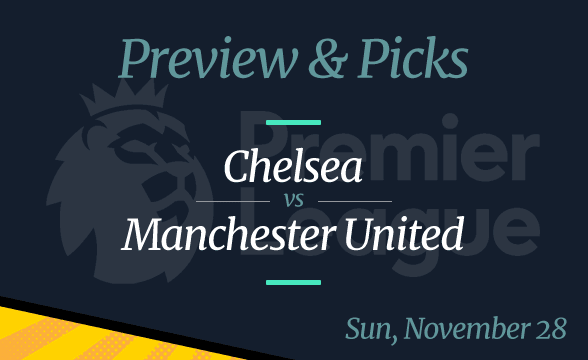 The Ole-Gunnar Solskjaer era in Manchester United is over. The Red Devils now have a caretaker manager to lead them. The man in question is their former midfielder Michael Carrick, whose debut happened on Wednesday when his team beat Villarreal in the Champions League 2-0.

Can he lead Man United to another win? Online sportsbooks are doubting it, as evident from the fact that odds on Chelsea are very short. Still, stranger things have happened in the Premier League, so the visitors have every right to feel hopeful ahead of their trip to Stamford Bridge.

All odds are per FanDuel as of November 25.

Chelsea Looking Unbeatable at the Moment

The winner of the 2020-21 Champions League has huge ambitions for this season. Not only do the Blues wish to retain their continental trophy, but they’ve also set their eyes on the Premier League title. Ahead of Gameweek 13, they’re at the very top of the table, three points clear of the reigning champ Manchester City.

What this means is that in order to stay at the top of the Prem, they need to continue playing well. Knowing how fantastic they’ve been over the last couple of weeks, such a scenario seems very plausible. Chelsea is without a single loss since September, winning most games they’ve played since.

The most impressive fact is that Thomas Tuchel’s boys continued winning even after some of their key men got injured. As a reminder, a few weeks ago, two of Chelsea’s key attackers got injured – Romelu Lukaku and Timo Werner.

The good news for the Blues is that both of them are back. Lukaku is ready to play his first game since October 20, while Werner has already made his comeback. The German striker came in as a substitute on Wednesday against Juventus and scored the fourth goal for his team.

The Red Devils’ new caretaker manager is their former captain Michael Carrick who had spent 12 years at Old Trafford before retiring in 2018. After finishing his playing career, he became a coach, the job he did until last week.

After Solskjaer got sacked by Man United, Carrick was put in charge. In his playing days, he was famous for his defensive plays, which is why it’s no surprise the Carrick-led United kept a clean sheet in his managerial debut.

The Red Devils are expected to focus on the defense once again. It’s likely we’ll see them on the back foot throughout the game, looking for their chances through counter-attacks and set-pieces. Will this tactic work?

It could work if their opponent weren’t Chelsea. This team seems to know how to deal with literally any style of soccer, including the one used by Carrick. Still, we probably aren’t going to see them putting away too many goals. Instead, a 1-0 or 2-0 win for Chelsea seems like the most probable scenario.