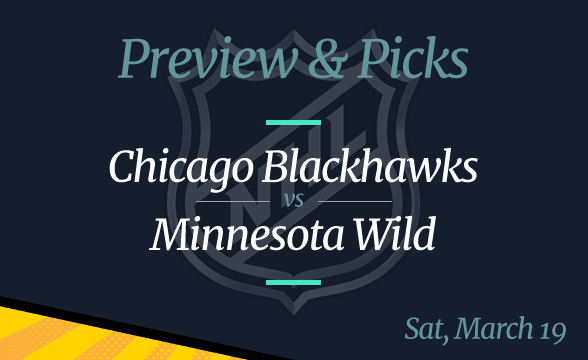 Xcel Energy Center in Saint Paul is where the Minnesota Wild will welcome the Chicago Blackhawks on Saturday, March 19. This is going to be their sixth meeting of the 2021-22 NHL season, with Minnesota winning four of those. Chicago did take two games to the overtime but lost each time.

Online sportsbooks think the Blackhawks will lose again, although their recent form suggests they could give the wild a run for their money.

What to Expect from Chicago Blackhawks Offense?

Chicago is 22-9-30 on the season, with 21 points fewer than the closest team in the playoff zone in the Central Division. The team in question is Chicago’s next opponent, Minnesota.

As there are only six weeks left before the end of the season, the chances of the Blackhawks making the playoffs look slim. Still, this team doesn’t seem eager to give up. Instead, Chicago’s players have improved their form significantly over the last couple of weeks.

This goes especially for their offense, which we saw score a lot of goals in the last ten games. Chicago scored eight against the New Jersey Devils in late February, as well as against the Anaheim Ducks on March 8. They also scored six goals against the Ottawa Senators last Saturday.

The Blackhawks, however, failed to score more than one goal in their most recent game. Played on Tuesday evening, the game saw them lose to the Boston Bruins 2-1 after overtime.

With a 35-4-20 record, the Wild have 74 points total after 59 games played. That’s a pretty impressive record, but their playoff future is still unknown. The thing is that there are several teams breathing by their necks, meaning that they mustn’t relax if they wish to get to the postseason. Instead, they need to make sure they beat weaker teams such as Chicago.

They did it the last time they played. It happened on February 2 in Chicago – Minnesota got a 5-0 shutout win that evening.

It was Minnesota’s biggest win over Chicago in more than five years. Most of their duels over the last couple of seasons were much closer. In fact, the last five Blackhawks vs Wild games played in Saint Paul, all went to overtime. I suspect we could see it happening this Saturday as well.

The Wild are a better team, but the Blackhawks are a team that loves to upset the odds. That said, we could see them cause a surprise on Saturday by taking the game to overtime.

Picks: Minnesota Wild to win but not cover the spread; over 6 goals