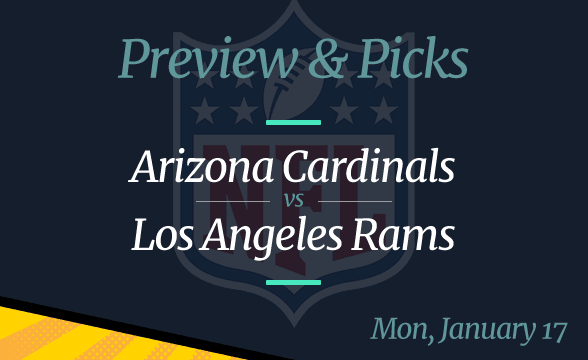 On Sunday, January 16, the two AFC West rivals – Arizona Cardinals and Los Angeles Rams – will meet for the third time this season. Their previous two duels were played in the 2021 NFL regular season and we saw each team getting a win. This time, the two clash in the NFC Wild Card Playoffs.

All odds are per DraftKings as of January 10.

After going 7-0 at the start of the 2021 season, the Cardinals’ run took the wrong turn. They then went on to lose six of the remaining ten games. The worst thing is that four of those losses happened in the previous five-game weeks.

Their most recent loss happened in the final round of the regular season. They played in front of their own crowd with the AFC West title on their mind. A win over the Seattle Seahawks would’ve brought them the divisional title, but the Cards ended up losing 38-30.

What’s really strange is that, unlike the Cardinals, the Seahawks had no special motivation to win that game, as their playoff race ended a few weeks earlier.

The worst thing about that game is the fact that two of Arizona’s running backs got injured. Their leading rusher James Conner picked up a rib injury, while backup Jonathan Ward left the field with a knee injury.

The LA Rams’ starting quarterback Matthew Stafford is 0-3 in the postseason, but there’s an explanation for that. Before the 2021 season, he was playing for the Detroit Lions. Now that he’s wearing the Rams’ jersey, his chances of recording at least one playoff win don’t look that bad.

Signing Stafford was just one of a number of big-name transfers the Rams made in recent times in an effort to bring glory to SoFi Stadium. Speaking of which, the Rams’ home ground is the world’s most expensive stadium, which has a capacity of over 70,000. Most of the fans that come to watch the Cardinals vs Rams game on Sunday will be rooting for the home team, which should give the LA players a real boost.

Evidence that they love playing at home is that the Rams are 5-3 this season at SoFi Stadium. One of those defeats, however, happened to the Arizona Cardinals. Still, it happened back when the Cards were in top form. Right now, they really don’t look capable of doing it again.

Picks: Los Angeles Rams to win and cover the spread; over to hit

US Horse Racing Handle for 2021 Biggest Since 2009, Data by Equibase Shows