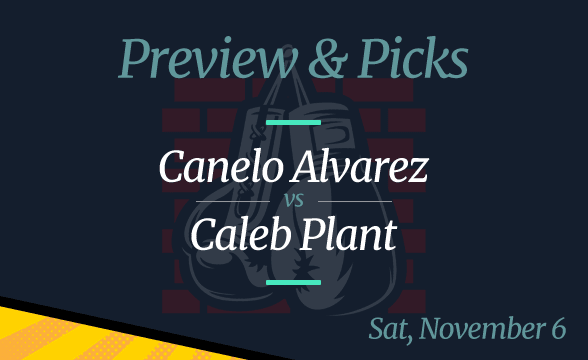 This Saturday, boxing fans are in for a real treat – one of the biggest bouts of 2021 will take place at MGM Grand Garden Arena in Vegas.

If you take a look at the betting odds, you’ll see that the bookmakers think Plant is going to suffer his first defeat of the career. He’s coming to Vegas as a +600 underdog.

All odds are per DraftKings as of November 4.

Why is Canelo Such a Strong Favorite?

It’s no surprise that sportsbooks think of Canelo Alvarez as a -1000 favorite. After all, the guy is one of the best middleweight boxers in the world. He’s won 56 fights so far while losing just one. The loss in question happened back in 2013, when he got defeated by legendary Floyd Mayweather.

Since then, he’s been nothing short of impressive, beating some elite boxers along the way – Billy Joe Saunders, Gennady Golovkin, Sergey Kovalev and others.

Now a 31-year-old, Canelo’s been a true knockout artist early in his career. He’s finished 38 of his 57 fights by a knockout/technical knockout. However, his most recent KO/TKO win happened in November 2019.

This shows that his fighting style has changed over the years. He’s evolved from an aggressive risk-taking boxer to a wise tactician who puts a lot of focus on defense. In fact, in 2021, Canelo Alvarez probably has the best defense in the boxing universe.

Can Plant Upset the Odds?

It’s safe to say that Caleb Plant is not as good technically as his next opponent. However, he could be superior physically. After all, he’s almost four inches taller than Alvarez, as well as has a longer reach.

Plant also has a fantastic boxing record with all wins in his 21 bouts. It’s an impressive record, but the fact is that he hasn’t faced too many elite boxers so far. In fact, the fight with Alvarez is the biggest challenge of his career.

His most recent fight happened in January when he defeated Caleb Truax, who was 31-4 before that bout. This Saturday, he’s taking on the man whose only career defeat happened to Mayweather years ago.

For all these reasons, it’s obvious why Alvarez is favored to win. It seems that anything other than that would be a huge surprise. The big question is whether Plant can stay on his feet until the final bell?

Probably not, but we might see him pulling through at least ten rounds, which is the margin set by the bookmakers.

IGaming and online cryptocurrency bookmaker Stake.com has unveiled an update of its displayed branding for the game between Watford FC and Chelsea FC. Stake.com Updates Branding in Support of the LGBT+ The move is a way for Stake.com to show support to the LGBT+ movement and support the Premier League Rainbow Laces campaign – a […]