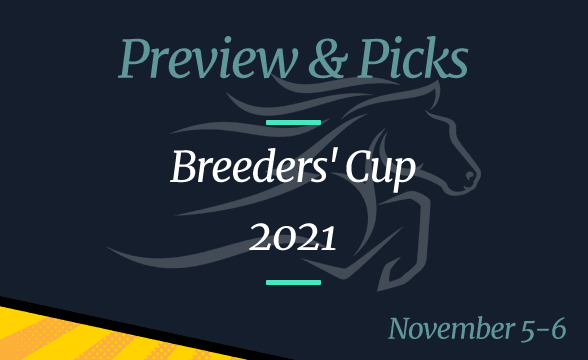 The Breeders’ Cup is one of the most prestigious horseracing events in the world, which has been run since 1984. The two-day event marks the end of the thoroughbred-racing season, with its second-day race – the Breeders’ Cup Classic – usually deciding the Horse of the Year.

Prestige is the fuel that’s powering the motivation of the Cup participants, while there’s also an incentive coming in the form of a $6 million purse. Knowing all this, one cannot be surprised that some of the biggest names in the horseracing universe are heading to Del Mar this coming weekend.

On Saturday, November 6, 2021, we’ll see some of the world’s most elite horses on the field. In fact, seven of the nine horses taking part already have a Grade 1 race title to their name. Further, six of those horses have earned $1 million or more for their owners.

It’s been an interesting year for the horse trained by Brad H. Cox.  Knicks Go started his five-year-old campaign by winning the Pegasus World Cup in January. Next was a halfway trip around the world to Saudi Arabia, where the horse took part in the richest horserace, the Saudi Cup.

Although Knicks Go started the race very well, he tired in the stretch, eventually ending the race in the fourth position. Pretty much the same scenario happened in June in the Metropolitan Handicap. However, since then, Knicks Go has been sensational.

With jockey Joel Rosario in the saddle, Knicks Go went on to win the next three races, achieving speed figures of 118, 117, and 115 along the way.

Essential Quality to Prove His Quality?

Here’s a horse that’s 8-for-9 in his career, which itself makes him one of the favorites for winning the 2021 Breeders’ Cup Classic. His only defeat happened this May in the Kentucky Derby when he finished in fourth place. He lost to the race winner Medina Spirit by just one length.

What’s worrying is that Essential Quality has had an extensive period of rest. In fact, we haven’t seen him racing for over two months – more than any other horse taking part in the 2021 Breeders’ Cup Classic.

Other Horses Worth Backing

Hot Rod Charlie seems to be in fantastic form, having run his best race of the career in late September. The event in question is the Pennsylvania Derby, where we saw him earning a 120 figure.

This year, he also won the Louisiana Derby, as well as finished second in the 2021 Belmont Stakes. In the Kentucky Derby, Hot Rod Charlie finished third, just before Essential Quality.

Speaking of the Kentucky Derby, its winner Medina Spirit is also among the top favorites to win the 2021 Breeders’ Cup Classic. The horse has featured in nine races in his career, never finishing worse than third.

Medina Spirit’s best performance was in the Kentucky Derby with 110, although that could be taken away from him. There’s an ongoing investigation on whether the horse was injected with steroids before the race. If the claims prove right, Medina Spirit will be stripped of the title.

Knicks Go is the #1 favorite for a reason. This is the fastest horse in the race, ridden by one of the world’s best jockeys, and trained by a legendary trainer. Plus, Knicks Go is on a three-race winning streak, suggesting that he’s at the top of the game.