Earlier this week, Calvin Ayre, founder of Ayre Group and CoinGeek, revealed how blockchain technology can help the gambling industry and change it in only a few years. The commentary was a part of CoinGeek’s new weekly show, Hashing It Out. The show’s premiere episode, which features Ayre himself and Rebecca Liggero, was released on Monday this week.

At the beginning of the conversation, Ayre stressed that Bitcoin SV (BSV) holds incredible potential not only for payments but also as a data management platform. He pointed out that a fundamental difference between BSV and other platforms which exist within the crypto space is that BSV scales unboundedly.

Furthermore, Ayre added that BSV is not crypto but rather a data management platform, which outperforms other platforms with significantly reduced fees. He explained that when other platforms scale up their volume, their fees increase significantly, which makes them unusable. “BSV is unique,” added Ayre.

“CoinGeek is the website that covers the data application of a public blockchain and that means only BSV because only BSV scales to enable enterprise data today“.

Commenting on the decision to close CalvinAyre.com, Ayre said that he realized that there is no need to have it anymore, mainly because all of the innovation and “fun stuff” that is already happening on CoinGeek. Furthermore, he acknowledged that CoinGeek is organizing multiple events in major cities around the world, which provide insight on BSV. Ayre said that those shows are going to be live-streamed and will reveal more details on how the BSV technology can solve data problems.

The Change to BSV to Be Driven by the Operators

Ayre acknowledged that there is a lot of misinformation regarding crypto currently. He added that Bitcoin or BSV is the original technology protocol, which makes it different from crypto. Furthermore, he revealed that the original Bitcoin protocol solves data problems, which is one of the main reasons why it doesn’t have other competitors.

“The more people use it, the cheaper it gets, and the better it works.”

Another point which Ayre raised is about the near future of many businesses. He predicted that in 10 years, everything else besides the games themselves will be done via blockchain technology. He did not miss noting that CoinGeek has launched a gaming channel, which is covering how blockchains are affecting the gaming space. Additionally, Ayre said that the more companies start using BSV technology, the faster they will see how they can pay a fraction of what they usually pay for transfers. According to him, this is a fundamental point, which many people need to understand.

Is the Tipping Point This Near?

According to Ayre, the platform will be beneficial for operators because they will see that they can run their entire business with the help of that same platform. At the same time, they will be reducing transfer costs. According to him, this revolution is expected this year with more operators getting aboard. Furthermore, Ayre predicted that in 10 years, the BSV platform will be implemented and will be used by everyone without them even knowing it. 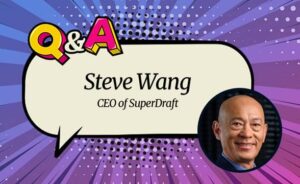