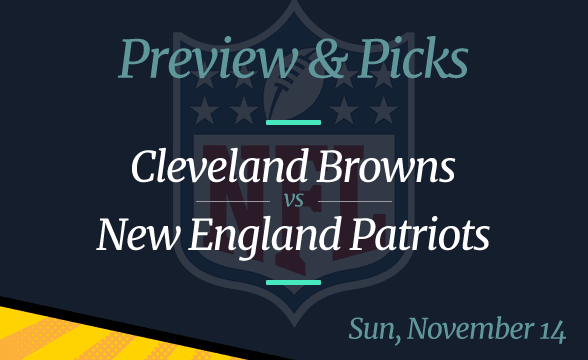 Both the Cleveland Browns and the New England Patriots are 5-4 ahead of their Week 10 clash with wins in the previous week. The 24-6 win over the Carolina Panthers was the third straight win for the Patriots. Meanwhile, the Cleveland Browns returned to the winning track after a loss to the Pittsburgh Steelers with a win over their interstate rivals, the Cincinnati Bengals.

As a result, both the Browns and the Pats are back in the race for the playoffs. Both teams have a chance to win the division, not to mention that the Wild Card entry is also on the table. To secure their postseason future, they just need to continue playing good football. Knowing all this, it’s only reasonable to assume we’re in for a real treat at Foxborough on Sunday.

All odds are per DraftKings as of November 10.

Odell Beckham Jr. is No Longer a Brown

Considered one of the best receivers in the NFL, Odell Beckham Jr. was meant to be the Browns’ key offensive player in the 2021 season. He did start six games this season, doing pretty well along the way. However, after Week 9, he’s no longer a Brown.

The reason is a social media argument involving his father and NBA legend LeBron James that got out of hand. It prompted the Browns to part ways with the WR, who’s now a free agent.

Without OBJ on the roster, who’s going to be their key pass receiver? TE David Njoku is their leader in receiving yards with 314, followed by WR Donovan Peoples-Jones with 314.

Still, the fact that their quarterback Baker Mayfield has made just eight passing touchdowns shows that the passing game isn’t their main weapon in 2021. Instead, it seems that the key to Cleveland’s success lies in rushing.

This team is second in the league in terms of rushing yards per game with 160.2. There’s no surprise there, as they got Nick Chubb to lead the way. The RB has gained 721 yards for his team in 2021, scoring six touchdowns along the way. Then, there’s Kareem Hunt with 361 yards and five touchdowns, as well as D’Ernest Johnson, whose tally is 195 rushing yards and two touchdowns.

On top of everything, the Browns QB has also been doing well rushing-wise. So far, Mayfield has covered 80 yards for one touchdown.

All things considered, it seems that the Browns will be able to cope without OBJ. This goes especially for the game with the Pats, who aren’t famous as a team that’s great when it comes to rushing defense.

Is It Time for the Pats’ Defense to Finally Crumble?

The Patriots have been sensational in the defense, with just 170 points conceded in nine games, which makes their average 18.8 points. What has to worry them ahead of the Week 10 game is that their rushing defense hasn’t been that great in 2021.

They’ve been allowing 108.9 rushing yards per game, which makes them the 14th best team in the league in this aspect. That might not be too bad, especially knowing that their average from the last season is 131.4. In fact, they were the seventh-worst team in the 2020 season where rushing defense is concerned.

Unfortunately for them, they’re taking on one of the best rushing offenses in the league on Sunday. The big question is can Bill Belichick figure out a way to stop the Browns rushers? Probably not, at least not enough to record another win.