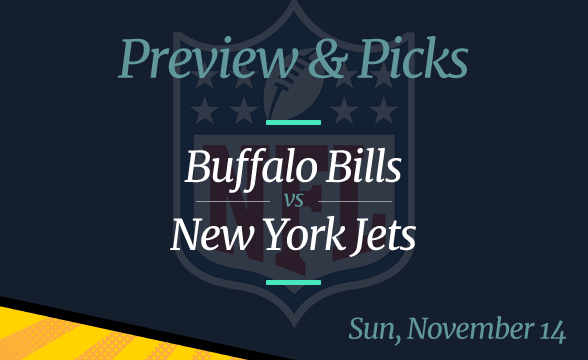 Both the New York Jets and the Buffalo Bills lost in Week 9. The Jets lost 45-30 to the Indianapolis Colts, which was expected. What wasn’t expected is that the Bills would lose to the Jacksonville Jaguars 9-6. With just two field goals scored, that was Buffalo’s worst offensive display since December 2019 when they lost 13-6. Which team did they lose to? The Jets.

Can history repeat itself this coming Sunday? According to bookmakers, the answer is no. The Bills are coming into Week 10 as huge favorites, with betting odds suggesting a blowout win for the visitors.

All odds are per DraftKings as of November 10.

Bills to Bounce Back After Disappointing Loss?

Buffalo entered the Week 9 game as a 15-point favorite. Oddsmakers expected a blowout win against the Jaguars, who were 1-6 before the game. However, the Jags surprised everyone by winning the game.

Actually, the real surprise was the Bills’ inability to score more than six points. Nevertheless, despite the debacle, their offense still remains one of the most productive in the league. In fact, with 29.4 points per game on average, they’re currently fourth in the league.

The main reason for the embarrassing offensive performance is that Josh Allen fell flat on his face. The Bills QB had one of the worst games of his entire career. He went 31/47 passing for 264 yards, which doesn’t seem that bad. However, he made zero touchdown passes, while two of his throws ended up intercepted.

His passing rate in that game was 62.7, which is significantly lower than what we saw from him in the previous games. Actually, in each of his previous five games, Allen had a passing rate of over 100.0. Knowing this, we can only assume Allen will bounce back straight away, taking his team to another win.

The Jets have the worst defense in the league, with 31.4 points conceded per game on average. Their average across their previous three games is even worse – 43.3. The worst thing, however, is that they allowed 45 in Week 9 against the Colts, which was their second-worst defensive display of the season.

On the bright side, the Jets did okay in the offense, scoring 30 against the Colts. A week before, they scored 34 in the win over the Bengals.

Their quarterback in those games was Mike White, who stepped in as a replacement for the Jets’ starting quarterback Zach Wilson. The question is who will take the starting QB role in the next game, as Wilson is expected to return from an injury.

Still, it seems that it’s not going to matter much in Week 10. After all, the Bills are a much, much better team than the Jets. Plus, they probably feel very motivated to get back to their winning ways.

Pick: Bills to win and cover the spread; over 47.5