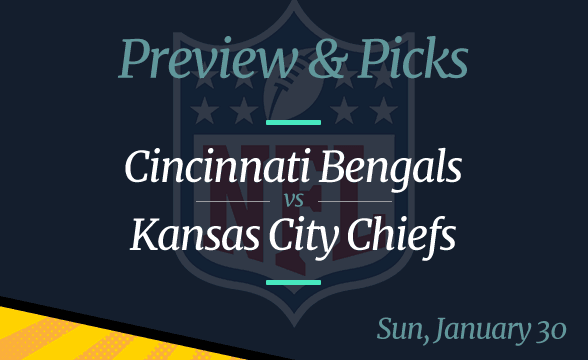 When the 2021 NFL season started, not many people thought the Cincinnati Bengals would get all the way to the AFC Championship game. But they did. They did it by defeating the Tennessee Titans in the Divisional Round. They entered the game as four-point underdogs but managed to win 19-16.

In the AFC Championship game, the Bengals are once again seen as the underdogs. This time, their opponents are seen as seven-point favorites. No surprise there as the team they’re squaring with is the Kansas City Chiefs.

All odds are per FanDuel as of January 24.

Can Bengals Upset the Odds Once Again?

The Bengals have been superb this season, especially in the last couple of weeks. This team won the AFC North Division after finishing the regular season with a 10-7 record, scoring a total of 460 points along the way – only four teams in the AFC scored more points (one of those is Kansas City).

The man most responsible for their offensive success is their quarterback, Joe Burrow. Cincinnati’s sophomore QB was superb in the regular season, recording a total of 4,611 yards and 34 passing touchdowns.

He also did well in the Wild Card game against the Las Vegas Raiders, throwing for 244 yards and two touchdowns, without a single interception. He didn’t do so great in the Divisional round, throwing for no TDs and one interception. Burrow did, however, generated 348 passing yards for his team against the Titans, helping the Bengals score four field goals.

Still, the main reason behind their win over Tennessee lies in their superb defensive performance. The Bengals’ defense allowed just two touchdowns and one field goal.

Chiefs Dreaming of the Super Bowl

Two years ago, the Chiefs won the Super Bowl. They were close to retaining the title in 2020, but the Tampa Bay Buccaneers defeated them in the NFC Championship game at Raymond James Stadium. This year, they have a very good chance of getting ahold of the Lombardi Trophy once again.

To do that, they need just two more wins and according to oddsmakers, they’re likely to do so. One of the reasons is that all the Chiefs’ key men who led the team to the Super Bowl LIV are still on the roster, including their biggest star, quarterback Patrick Mahomes.

Another reason why the Chiefs look capable of winning the trophy is that their defense seems stronger than before. Evidence of this is that since the beginning of November, Kansas conceded 10 points or under in five of their 12 games.

The most they allowed during that run was 36 points. What has to worry them is that it happened last Sunday, when they played against the Buffalo Bills in the Divisional Round. The score was 42-36 for the Chiefs after a 36-36 tie in regulation.

Still, the Bills do have a better offense than the Bengals, despite their superb recent run. That said, the Chiefs’ defense should be able to contain Burrow and Co.

Picks: Kansas City Chiefs to win and cover the spread; over to hit