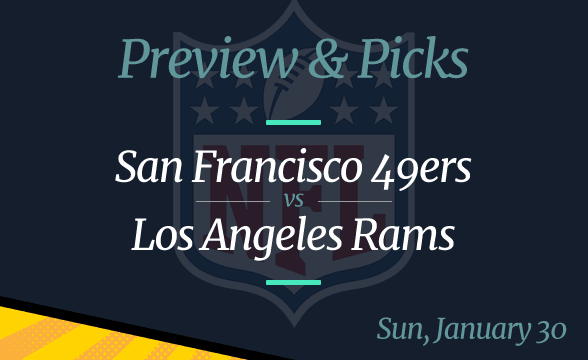 Just two weeks ago, Matt Stafford had no playoff wins in his portfolio. Now, the Los Angeles Rams quarterback has a chance to win the NFC Championship and get to the Super Bowl LVI. To get there, his team needs to beat the surging San Francisco 49ers.

All odds are per FanDuel as of January 24.

Back in the first part of the season, the Niners were 3-5, and their chances of making the playoffs looked very poor. However, they then went into a fantastic streak, culminating in a win over the Los Angeles Rams in the final round of the regular season.

Thanks to that win, they booked themselves the ticket to the postseason. Their first opponent was the Dallas Cowboys in the Wild Card round. Even though the Niners went to Texas as underdogs, they managed to beat the favorites 23-17.

Their feat was overshadowed by their performance in the Divisional Round. The Niners went to Lambeau Field and defeated the Green Bay Packers, who, at the time, were the #1 favorites for the Super Bowl.

The best thing about the win over the Packers is that they were 10-3 down until ten minutes into the final quarter. What happened then was that their defensive lineman Jordan Willis broke through the Packers line and got a hand on the kick, after which their rookie safety Talanoa Hufanga caught the ball and run it all the way to the end zone.

Hufanga’s touchdown tied the game. Then, in the final moment of the game, placekicker Robbie Gould scored a three-pointer.

Similar to the Niners, the Rams too got to the NFC Championship Game after a real thriller. In the Divisional Round, they defeated the reigning NFL champs, Tampa Bay Buccaneers. The Rams started the game in top gear, getting to 7-3 at one point in the third quarter.

Then, Tom Brady led the Buccaneers to a 24-point drive, eventually tying the game to 27-27 in the last minute of the game. Quarterback Stafford and wide receiver Cooper Kupp then took the stage.

After the two connected two passes, the Rams entered the field-goal zone. As the time run out, placekicker Matt Gay had a chance to score three points from 30 yards. He took his opportunity, getting his team a 30-27 win and a shot at the conference title.

Are they going to take the shot? The Rams surely have a better bunch of players than the Niners, but what needs to worry them is that San Francisco has become a real giant slayer. Further, The Rams have a very bad record against this team, losing each of their previous six duels.

Nevertheless, the Rams definitely look capable of ending the poor streak, although it surely isn’t going to be easy.

Picks: Los Angeles Rams to win but not cover the spread; under 46.5 points