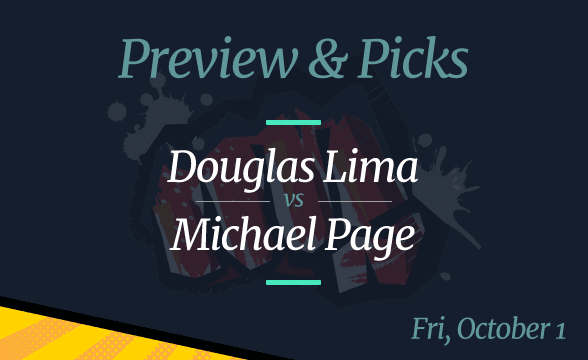 Bellator is coming back to London for the first time since November 23, 2019. The event in question is Bellator 267: Lima vs. MVP 2, which will take place at UK’s largest sporting venue, Wembley.

The headliner bout is the one that’s getting all the headlines. No surprise there, as Douglas Lima and Michael Page (MVP) are two foes that have already met once. It happened two years ago, when Lima inflicted MVP his first defeat in his professional career.

Obviously, the British fighter wants revenge, but it’s not going to be easy. In fact, a very close fight is expected, as evident by Lima vs. MVP 2 odds.

All odds are per DraftKings as of September 230.

Douglas Lima Hoping to Bounce Back After Two Straight Losses

Lima vs. MVP 2 is a welterweight bout, which is the division in which Douglas Lima has been fighting for more than a decade, with just one middleweight fight along the way. The same isn’t the case with MVP, who’s just moved down a division.

Does this mean Lima will have an advantage in their Bellator 267 clash? Not necessarily, as the Brazilian fighter hasn’t been too convincing in his previous couple of fights. Actually, Lima lost two previous bouts – to Yaroslav Amosov (June 2021) and Gegard Mousasi (October 2020).

His most recent win happened against Rory MacDonald in October 2019, when the judges declared him the winner. A few months earlier, Lima beat Page by KO in Round 2, which remains his last win by that method.

MVP to Get His Revenge?

If it weren’t for the first Lima vs MVP fight, Page would still be undefeated. Now, however, his professional record is 19-1. Most of those wins (12) happened by knockout. It’s needless to say that MVP would love to exact his revenge by knocking out Lima.

He has the motivation and will also have the fans on his side. Being a UK-based fighter, it’s almost certain that most of the fans at Wembley will be rooting for this guy.

The big question is whether he has the ability to knock out Lima? Judging by what we’ve seen from him since the first loss of his career, the answer is yes.

Page lost to Lima in May 2019, then went on to win the next five fights. Three of those ended by knockout, one by technical knockout, and one by unanimous decision.

Knowing all this, it seems that we’ll see MVP exact his revenge on Friday evening.