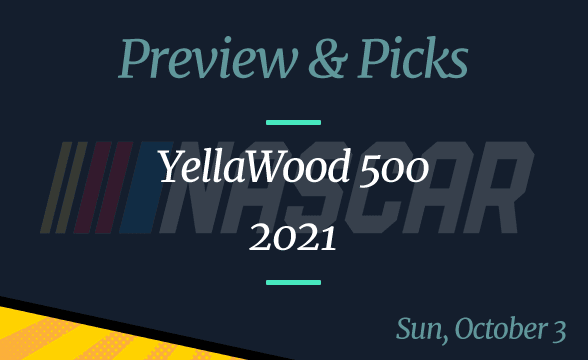 NASCAR is coming back to Talladega Superspeedway, where the 105th edition of the YellaWood 500 will take place this weekend. It’s the second race of Round of 12 of the 2021 NASCAR Cup Series, the first being the South Point 400, which happened a week ago.

Denny Hamlin won last weekend’s race, which put him just 14 points behind the leader of the 2021 Drivers’ Championship, Kyle Larson. Speaking of Larson, he finished in tenth place at Las Vegas, which came as a big surprise. He can’t let anything similar happen again – he needs to go for a win at YellaWood 500.

Will he do it? Oddsmakers don’t think so. In fact, they believe Denny Hamlin will continue his winning run.

Can Kyle Larson Get Back to His Winning Ways?

Ahead of the South Point 400 race, Larson was the top favorite with the odds of +330. However, he finished the race in tenth place. The man who won the race was Hamlin, whose pre-event odds were as long as +800.

Ahead of the YellaWood 500, there’s no clear favorite. Hamlin stands out from the crowd with the price of +900, but there are plenty of other drivers who are just behind. One of those is Larson, who’s currently priced at +1200.

One reason why the Drivers’ Championship leader isn’t the main favorite is that Larson hasn’t had much success at Talladega Superspeedway. In fact, he’s still without a single win at this place.

Another reason is that his main rival, Hamlin, seems to love racing in Alabama. Evidence of this is that Hamlin is the driver who won the 2020 YellaWood 500.

Denny Hamlin to Continue to Impress?

Hamlin is the betting favorite and there is a reason for this. Not only did he win the last season’s race at Talladega, but he’s also coming to Alabama after some pretty superb results. He won last Sunday’s race in Las Vegas, as well as the 2021 Cook Out Southern 500 on September 5.

Thanks to his impressive form, Hamlin has closed the gap between him and Larson. With a win at YellaWood 500, he would get to the very top of the rankings. That’s more than enough motivation for him to do well on Sunday.