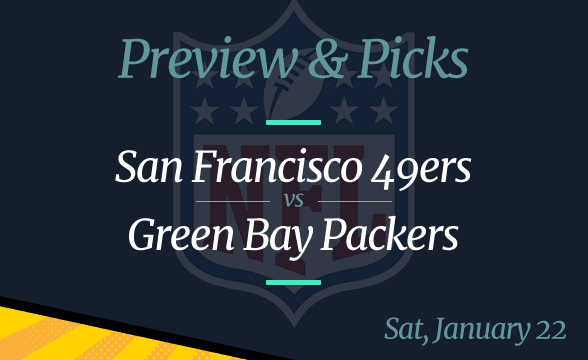 The San Francisco 49ers are traveling to Wisconsin to take on the Green Bay Packers in the Divisional Round of the NFL playoffs. The Niners got there after defeating the Dallas Cowboys in the Wild Card game last Sunday, in a game in which they were four-point underdogs.

Meanwhile, the Packers had a bye in the first round of the postseason thanks to the fact that they finished at the top place of the NFC table.

All odds are per FanDuel as of January 17.

Can the Niners Upset the Odds Again?

Until very late in the regular season, the 49ers were thought of as underdogs to make the playoffs. However, their superb drive in the final couple of rounds of the season got them to the postseason. They booked their postseason ticket in Week 18 by beating the Los Angeles Rams 27-24 in overtime at SoFi Stadium.

They surprised the odds in the final game of the regular season, then did the same in the Wild Card game. The Niners defeated the Cowboys 23-17 in Texas, thanks to a superb running game. Their rookie running back Elijah Mitchell scored the first touchdown of the game. The Niners’ other TD of the game was scored by receiver Deebo Samuel, who’s having the time of his life in the 2021-22 season.

What’s got to worry the Niners is that their quarterback Jimmy Garoppolo didn’t do too great. He threw for no touchdowns, as well as got one of his throws intercepted.

The Packers Having Super Bowl Ambitions

In the 2020 season, the Packers’ postseason journey ended in the NFC Championship game in which they lost to the Tampa Bay Buccaneers. The defeat caused all sorts of problems in their locker room, with the franchise legend Aaron Rodgers demanding a transfer.

Things have settled since, with Rodgers signing a contract extension just before the start of the 2021-22 campaign. The question is whether he’ll be okay with staying at Lambeau Field for another season if his team exits the playoffs too early.

That said, losing to the Niners on Saturday is not an option for this team. They have the player quality, as well as the motivation to win in the Divisional Playoffs. Further, thanks to the fact that they finished with the best record of all the teams in the NFC, the Packers have had an extra week to prepare for this game.

Plus, finishing at the top of the conference table also meant that the Divisional game is going to be played on their turf. Speaking of which, Lambeau Field is the venue where the Packers are undefeated in competitive games since losing to the Bucs in the NFC Championship game a year ago.

Picks: Green Bay Packers to win and cover the spread; over to hit