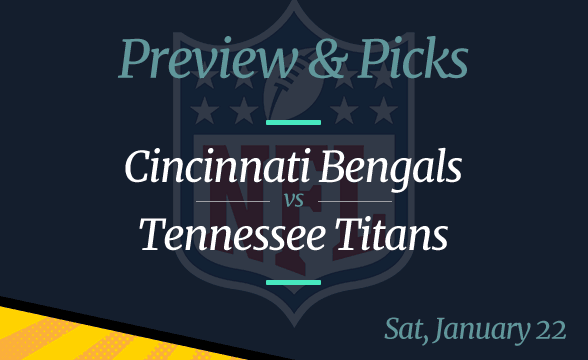 The clash between the Cincinnati Bengals and Tennessee Titans is taking place in Music City on Saturday as a part of the Divisional Round of the NFL playoffs. The Bengals have reached this stage of the postseason for the first time in 31 years. Still, oddsmakers think their journey will end there, thinking of the Titans as a huge favorite.

One of the reasons why the hosts are expected to win this game is that their arguably best player should make a comeback. The man in question is running back Derrick Henry, who was out of the field since Week 8.

All odds are per FanDuel as of January 17.

Bengals Hoping to Upset the Odds

Cincinnati went 10-7 in the regular season, thus winning the AFC North for the first time since 2015. Then, in the Wild Card stage of the playoffs, they defeated the Las Vegas Raiders. That was the Bengals’ first win in the postseason since 1991.

Thirty-one years ago, the Bengals defeated the Houston Oilers. The team has since changed its name to the Titans, as well as moved to Tennessee. The question is whether the Bengals do it again more than three decades later?

Although they don’t seem to have the manpower needed to defeat such a powerful team as Tennessee, the Bengals have been pretty impressive this season. They’ve been particularly good in the offense, where their second-year quarterback Joe Burrow has been superb over the last couple of weeks.

The sophomore QB threw for two touchdowns in the playoffs, with zero interceptions. What’s even more impressive is that we saw him throwing four TDs in each of the final two games of the regular season. Burrow is also without a single interception since Week 13.

Titans Ambitions Growing All the Time

The Tennessee Titans are currently priced at +700 for winning the Super Bowl. The reason for that is that they’ve been fantastic throughout the 2021-22 campaign. Not only have they been fantastic in the offense, but their defensive team has also been good.

In the last game they played in the regular season, they conceded 25 points, which isn’t that great. Still, the game had no importance for the Titans as they locked the divisional title much earlier. Nevertheless, despite allowing so many points, they still managed to score 28 and get themselves a win over the Houston Texans in Week 18.

The Philippines to Extend Limited Capacity Protocols for Casinos, Venues