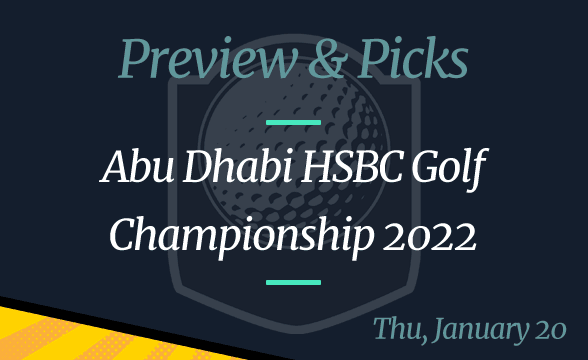 Abu Dhabi is where the crème de la crème of the golf universe is going to gather on Thursday, January 20, 2022. That’s when the Abu Dhabi HSBC Championship tees off as the first tournament of the DP World Tour, previously known as the European Tour.

Tyrrell Hatton is the defending champion, but there are plenty of superstars who wish to see him fall from his throne. Those include the three champs – Collin Morikawa and Rory McIlroy – who are seen as the two top favorites.

Can Tyrrell Hatton Defend the Title?

Hatton was the golfer who won the last year’s tournament in Abu Dhabi. However, with the odds of +2400, online sportsbooks don’t think it’s likely he will retain the title. One of the reasons for that is that this year, competition is much fiercer than in 2021.

Last year, Hatton didn’t have to worry about Colin Morikawa, the #2 player in the Official World Golf Ranking. He also didn’t have Viktor Hovland to ruin his plans, the man who’s currently sitting four spots below Morikawa.

Speaking of the rankings, the reigning champ is coming to UAE with his name placed in the 21st position in the list.

Is It Time for a Rory McIlroy Resurgence?

Although 2021 wasn’t a vintage year in McIlroy’s career, evidence being that he’s currently in the #9 position in the world, the Northern Ireland golfer did finish the year with a CJ Cup win. He won the PGA Tour win, leaving such giants behind him as Morikawa, who finished second.

Three months have passed since and McIlroy is looking to continue winning. Oddsmakers think his ambitions are justified, making him the joint favorite to win the Abu Dhabi event together. The other man in the equation is Morikawa who’s looking for revenge.

It appears that this is going to be a two-horse race led by the two golfing legends. So, who’s going to finish better? The fact that Morikawa is ranked seven places higher than McIlroy suggests that, currently, he’s playing better golf than his rival.

PickGuru Forays Into the UK With an Exciting Jackpot Offering

Japanese billionaire Kazuo Okada, the founder of Okada Manila, has finally issued a statement regarding the ongoing dispute over the casino resort, which he took control over together with Antonio “Tonyboy” Cojuangco and Dindo Espeleta on May 31. Kazuo Okada’s Statement In his statement, directed toward the staff of the Okada Manila casino resort, Okada […]

Sega Sammy Creation Inc announced on Friday that the company is close to releasing its new cutting-edge gaming cabinet, Genesis Crest 43 J, across markets in Asia. The company confirmed that the new cabinet will come with a strong hardware core and a slick designer’s look. The cabinet uses a 43” J-curve monitor that renders […]