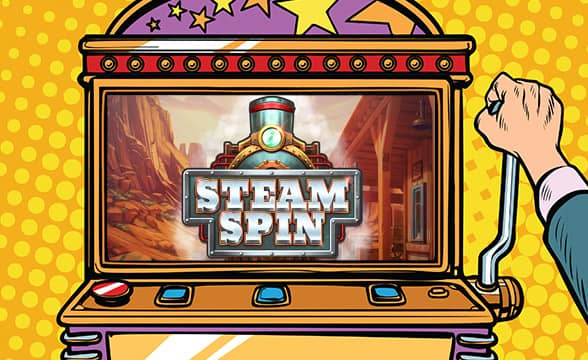 The 3×3 block game features nine paylines and it is packed with standard fruit symbols, along with wild multipliers, golden wilds, and a series of scatters meant to considerably boost the value of the spins. With more condensed paylines, the game is easy to comprehend, while the gameplay is considered simpler and more straightforward. With a maximum win of $905,000 ready to be scooped up, Steam Spin is expected to draw the attention of many passionate slot fans.

The high-volatility game with a 96% RTP comes with a series of low-value symbols such as cherries, lemons, pears, and plums. Matching at least three of the same symbol during a single spin will bring players between x0.5 and x1.5 the original bet in wins.

Bells, suitcases, and conductor hats are medium value symbols within the game with between x5 up to x25 wins for landing three symbols during a single spin. Steam Spin has designed gold bars as the symbols with the highest value, displaying x100 as the initial bet in winnings for matching three symbols. The game also offers players a number of exciting wild multipliers, together with the Steam Spin bonus, Charging mode, and Red Hot Steam Spin features.

The wild multipliers will add between 1x to 10x on winning lines, while also being able to trigger respins. Once a wild will land on any of the reels, it will be locked in place and pushed down a position, triggering a respin. The same wild symbols can be used while in Steam Spin mode while having the row above the main reel locked. Provided a wild symbol will reach this exact reel, its corresponding slot will be unlocked in the row above. When all three slots will be successfully unlocked, the player will be sent into Charging mode.

In Charging mode, landing multiplier wilds will transfer their value to the reel on top of the gameboard. The Steam Spin Bonus is triggered once any of the multipliers reaches 10x.

Yggdrassil and Jade Rabbit Thrilled About Their New Collaboration

The Steam Spin slot game is Jade Rabbit’s third collaboration with YG Masters, with previous titles like Word of Thoth and Jambo Cash having already proven their success. The game is powered by GATI and Yggdrasil’s top-tier technology that enables its partners to use its powerful development toolkit to create state-of-the-line gaming content that can be quickly distributed on global markets.

Yggdrasil’s head of product and program Stuart McCarthy has expressed the company’s delight regarding the new release in collaboration with Jade Rabbit’. Jade Rabbit’s Managing Director Roger Admeus further added the company’s partnership with the prestigious YG Masters program enables them to design highly innovative and unique casino experiences, with Steam Spin being just one of the latest releases of its kind.