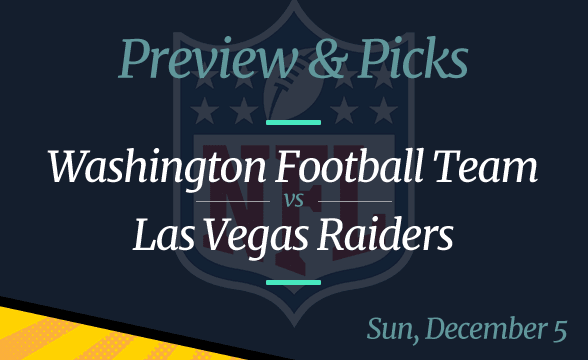 After three straight losses, the Las Vegas Raiders are finally back on the winning track. They beat the Dallas Cowboys in the TNF game of Week 12. Ten days later, they welcome the Washington Football Team at Allegiant Stadium and bookmakers think they’re going to win.

This may come as a bit of a surprise, considering that the WFT is coming off three straight wins in November. They also have a pretty decent record against the Raiders, leading the all-time series 4-2. Does all this mean the bookies are wrong? Read our WFT vs Raiders preview to find out!

All odds are per FanDuel as of December 1.

The Raiders have finally snapped out of their losing streak. After three straight losses, they finished the month with a win over the favored Dallas Cowboys. It wasn’t an easy win, that’s for sure. After 33-33 in regulation, the Raiders defense prevented the opposing offense from scoring a touchdown; then, the Raiders offense brought them a win via a three-pointer.

The game saw Rich Bisaccia’s boys doing very well rushing-wise, scoring two touchdowns this way. Their passing game was decent as well. The game with the Cowboys was the first time since Week 7 that the Raiders quarterback Derek Carr didn’t throw a single interception.

Not only did the win over the Cowboys give them a big morale boost, but it also improved their chances of getting to the postseason. Ahead of the Week 13 clash with the WFT, the Raiders are 6-5. What this means is that they still have an opportunity to challenge the top spot in the AFC West, which is currently occupied by the Kansas City Chiefs (7-4). On top of that, the Raiders also have a really good chance to get to the playoffs via Wild Card.

Washington is coming off three straight wins, in each of which this team was the underdog. It all started with the win over the Tampa Bay Buccaneers in Week 10. The WFT entered the game as a 10-point underdog only to beat the Bucs by 10 points.

In Round 11, they beat the Carolina Panthers by a touchdown, even though sportsbooks saw them as four-point dogs before the game. Finally, last Monday, Washington beat the Seattle Seahawks by two points in a game in which they were a one-point underdog.

Once again, the oddsmakers think Washington will lose even though they have momentum on their side. What they don’t have is fully rested players. The fact that their last game was played on Monday evening suggests that they might not be 100% ready for the clash with the well-rested Raiders.

Picks: Las Vegas Raiders to win and cover the spread; under to hit

Aristocrat Acquisition of Playtech Still on Course to Complete in Q2, 2022