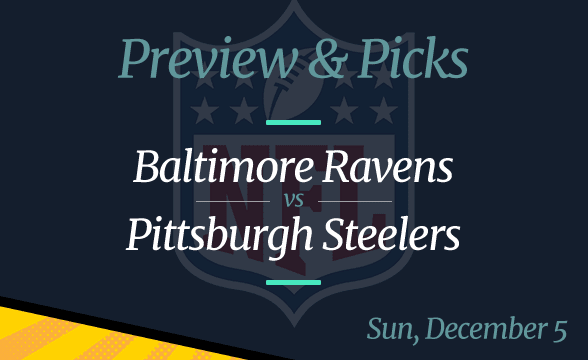 The Baltimore Ravens are once again flying high. After a couple of disappointing performances a few weeks ago, they seem to be back in shape. The Ravens are coming into Week 13 following back-to-back wins and are seen as the favorites to beat the Pittsburgh Steelers on Sunday evening.

The Ravens have the momentum on their side, but the Steelers have the motivation on theirs. The thing is that if Pittsburgh loses to its AFC North rival this weekend, its playoff hopes could vanish completely.

All odds are per FanDuel as of December 1.

The Ravens are Great, but Lamar Jackson Needs to Do Better

Baltimore is 8-3 on the season, with two losses happening in the previous five rounds. The reason behind the Ravens’ defeats lies in their offense. Their offensive team just hasn’t been very good lately. In their previous five games, they scored a total of 93 points, which accounts for just 18.6 points per game on average.

When the offense isn’t working properly, the blame is usually on the quarterback. Even though Baltimore’s QB Lamar Jackson is thought of as one of the best in the league, the fact is that he hasn’t been playing top football in recent times.

Just take a look at Jackson’s stats from his team’s previous game. In Week 12, the Ravens beat the Cleveland Browns 16-10, with Jackson going 20-for-32 for 165 yards and one touchdown, throwing four interceptions along the way.

That simply isn’t something that can be tolerated by such a talented player as Jackson. That said, you can be sure that he’s going to up his game in Week 13. What this means is that the Steelers’ defense is in trouble.

The Steelers’ Defense Could be In Big Trouble

Pittsburgh is coming off two straight losses, in each of which they conceded 41 points. The worst thing is that they didn’t play against too strong offenses in those two games. They played against the Los Angeles Chargers and the Cincinnati Bengals.

Even before those two embarrassing losses, the Steelers weren’t playing well. In Week 10, they played a 16-16 tie with the NFL’s worst team, the Detroit Lions. A week earlier was when their last win happened.

It was far from impressive – they beat the Chicago Bears 29-27, with the Bears’ placekicker missing a field goal two seconds before the end of the game.

Knowing all this, one can’t help but wonder if the Steelers actually have the quality to avoid a loss to their divisional rivals. They need a win to keep their postseason dreams alive, which suggests they’ll be fired up on Sunday. Still, knowing what we know about their recent performances, it’s as if they’ve already given up.

Picks: Baltimore Ravens to win and cover the spread; under to hit