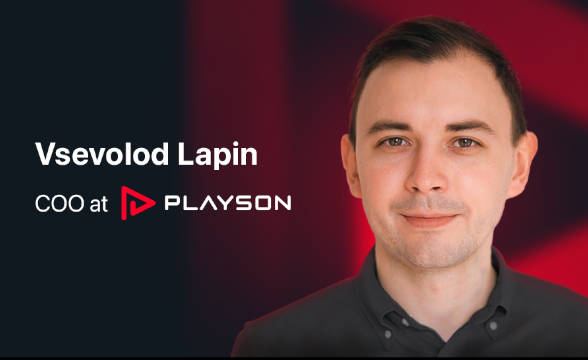 Playson has officially promoted Vsevolod Lapin as the company’s new chief operating officer. The promotion will accompany Lapin with a range of new responsibilities, such as improving game production, helping the market expansion, enforcing Playson’s brand identity, and will oversee its product portfolio.

Lapin Joined Playson Back in 2017

While speaking about his promotion, Lapin stated that he’s very thankful for the opportunity that he’s been provided with. He stated that this is a special moment for him, especially because his appointment comes at “such a pivotal time for Playson.”

He added that Playson has a team of experts and managed to progress a lot in a very short time. Lapin concluded by saying that he will help in enhancing the company’s position in the iGaming market.

Alex Ivshin, Playson’s CEO, also commented on Lapin’s appointment and stated that everyone at the company is delighted to have him as the new COO and Playson’s leaders are adamant that Lapin will deliver the best results. Ivshin added that since Lapin joined, he showed his passion, motivation, and hard work on multiple occasions.

Lapin started working as a product manager at Playson in 2017. His hard work and dedication led to him being promoted to head of the product department just 8 months after joining the company. Before joining Playson, Lapin worked as a senior brand manager at the Coca-Cola Company, brand manager at Jacobs Douwe Egberts, and confectionary brand manager at Mondelēz International. In total, he has over 10 years of working experience.

Playson Is Refreshing Its Brand Identity

The appointment of Lapin comes shortly after Playson decided that it will be refreshing its brand identity by delivering high-quality games and supporting promotional tools to players from all around the world. In the last quarter of 2021, Playson partnered with OmniSlots to enhance its European influence.

Then, in January 2022, it announced a new high-quality slot, Joker’s Coins: Hold and Win, whose RTP rate sits at 95.71%. The company has also been vocal on the Russia-Ukraine conflict and it commended the braveness of its team based in Ukraine for joining the efforts against the Russian aggression.

In an official statement, Playson said that it stands with Ukraine and condemns the Russian invasion of the country. Numerous other members of the gambling industry share the same standpoint on the invasion as well.