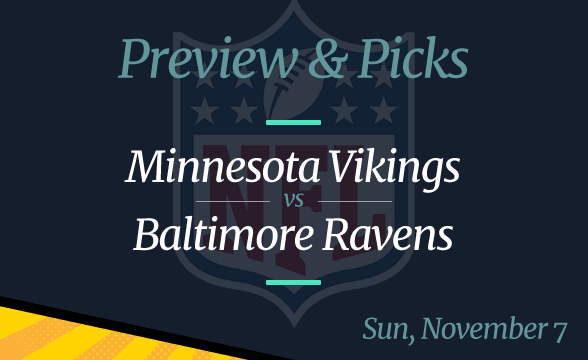 The Baltimore Ravens are coming off a bye in Week 8, which seems to have come at the right time for this team. It’s because one week earlier, their five-game win series came to an end when the Cincinnati Bengals demolished them 41-17.

The Ravens have had plenty of time to lick their wounds and prepare for the Week 9 clash with the Minnesota Vikings, who are coming to Baltimore following a home defeat. Last Sunday, they suffered their fourth loss of the season when the Dallas Cowboys beat them 20-16.

Oddsmakers think the Vikings will suffer another defeat this coming weekend. And they think it could be a blowout win.

All odds are per BetOnline.ag as of November 1.

The Ravens’ Secondary Needs to Do Better

The reason why Baltimore suffered a blowout loss to the Bengals is that their defensive team was decimated with injuries. Actually, this team’s been having defensive problems throughout the season, which is why it’s no surprise their passing defense has been horrendous – they’ve already allowed 400+ passing yards in three games this season.

In Week 7, their two-time Pro Bowl cornerback, Marlon Humphrey, just couldn’t do anything against the Bengals’ rookie receiver Ja’Marr Chase, who gained 201 yards for his team, as well as scored one touchdown.

The good news is that Humphrey surely has what it takes to improve his game. Plus, he and his team have had plenty of time to figure out how to prevent a similar scenario from happening in Week 9.

Another good news for the Ravens defense is that veteran defensive end Derek Wolfe is back from an injury. He had a wonderful season last year with 51 total tackles, and is expected to continue playing well upon his return.

Still, even if the Ravens defense doesn’t do overly well against the Vikings, we should expect their offense to be superb. After all, they got an MVP candidate to call plays. Lamar Jackson is the man in question, a QB who’s been producing some superb performances throughout the season.

Even in the Bengals’ defeat, he did pretty well – we saw him passing for 257 yards for one touchdown and no interceptions.

It’s very likely he’ll do at least as much in the game with the Vikings.

The Vikings are 3-4 on the season with practically no chance of winning the NFC North. There is still a chance that they could get a Wild Card entry to the Playoffs, but based on what we’ve seen so far from the Vikings, it might not happen.

The thing is that this team has already missed plenty of chances this season. For instance, they lost to the Bengals in overtime in Week 1. We also saw them losing by just one point to the Arizona Cardinals, with their placekicker missing a three-pointer in the last second of the game.

More recently, the Vikings lost to the Cowboys, who were without their best player, Dak Prescott. It happened last weekend in Minnesota, where the hosts failed to score more than one touchdown.

Knowing all this shows why the oddsmakers are leaning toward a big win for the Ravens. They’ve set the spread to six points, which the home team should be able to cover with ease.

Pick: Baltimore Ravens to win and cover the spread; under 49.5 to hit.