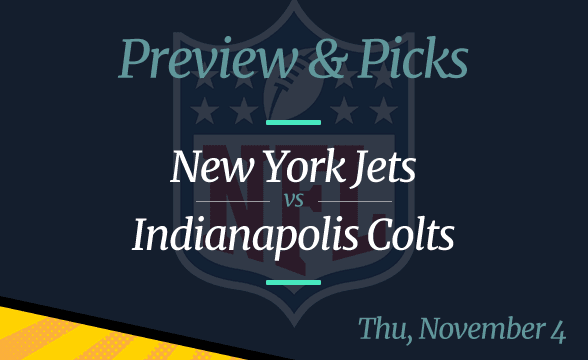 Both the New York Jets and the Indianapolis Colts have five losses in 2021, but the Colts have one more win than the Jets. The reason is that they’ve played one more game than the team from New York. With a 3-5 record, however, their chances of booking a postseason ticket do not look great.

It would’ve been a whole different story if they won the divisional duel with the Tennessee Titans last weekend. However, they ended up losing in overtime, meaning that it’s almost impossible for them to win the AFC South. They do, however, have a chance to battle for a Wild Card entry. For that to happen, they will need to get back on the winning track.

Luckily for them, they’re taking on one of the worst teams in the NFL. The Jets did beat the Cincinnati Bengals on Halloween, but that was only their second win of the season. As you can see below, bookmakers do not think they’ll get to their third victory anytime soon.

All odds are per DraftKings as of November 1.

A Must-Win Game for the Colts

The Colts must feel very bad about themselves after losing to the Titans at home in overtime last Sunday. What’s worst is that they had a 14-point lead in the first quarter in that game. They did okay in all aspects of the game and if it weren’t for a couple of poor calls by the coach Frank Reich, they probably would’ve grabbed a win.

The coach did take all the blame after the game, suggesting he and his boys will work even harder to get back to their winning ways. As a reminder, the Colts had back-to-back wins before losing to the Titans. By beating the Jets in TNF, they’d get to 4-5, which could mean a lot for their Wild Card hopes.

A win would also give them the morale boost they need as their schedule is going to get ugly in the second half of November. After the Jets game, they play the Jacksonville Jaguars, but then have two very tough games – versus the Buffalo Bills in Week 11 and the Tampa Bay Buccaneers in Week 12.

In the absence of the Jets’ starting QB Zach Wilson, Mike White was appointed their signal-caller. He was in that role in Week 8 and will play the quarterback on Thursday night.

The reason is that White was the man responsible for taking the Jets to their second win of the season. In his first career start in the NFL, White threw for 405 yards for three touchdowns and two interceptions.

Thanks to his input, the Jets were able to beat the favored Bengals 34-31 in a game they entered as a three-point underdog. This time, they’re seen as an even bigger underdog, suggesting that bookmakers don’t think they can cause two upsets in two straight weeks.

The thing is that their roster just isn’t as good as the one of the Colts. Still, the fact is that morale is sky-high in their locker room. This, of course, does not mean their chance of winning in Week 9 is good. However, we probably aren’t going to witness a blowout loss.

Pick: Indianapolis Colts to win but not cover the spread; under will probably hit.