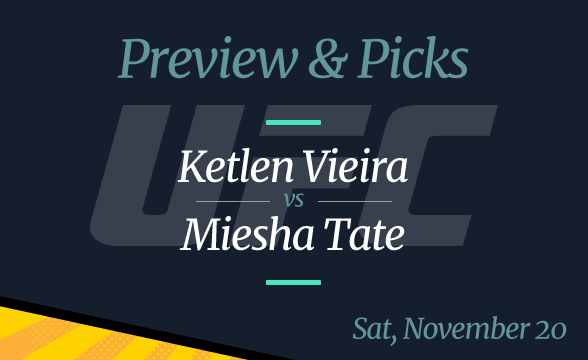 Ketlen Vieira vs Miesha Tate is the headliner fight of UFC Vegas 43, an MMA event taking place at the UFC Apex in Vegas on Saturday, November 20.

This is the first time Vieira (11-2) is headlining an event in her career. For the former champ Tate (19-7), headlining a UFC event is nothing out of ordinary. Still, despite having the fame and experience, Tate isn’t the betting favorite coming into this bout.

All odds are per FanDuel as of November 18.

Ketlen Vieira Favored by the Bookies

The Brazilian Vieira is 11-2 in her professional MMA career, which started in 2014. Two years after her debut, she fought her first UFC fight. It happened in October 2016, when she beat Kelly Faszholz by split decision at UFC Fight Night: Lineker vs Dodson.

Since then, she fought another six fights, winning four and losing two. Her most recent fight saw her losing to Yana Kunitskaya last February. She now has a chance to rebound against a fighter who hadn’t fought for nearly five years before coming out of retirement in July 2021.

Miesha Tate Still Has It?

Tate, the former UFC Bantamweight champion, retired in 2016 after losing two straight UFC fights. First, she lost the championship belt to Amanda Nunes; then, we saw her losing to Raquel Pennington, who was 8-5 before that bout.

Almost five years later, Tate decided to come out of retirement. Her first UFC fight was against Marion Reneau in July 2021. Tate won the bout with a third-round knockout, which earned her the Performance of the Night award.

Then, Tate was supposed to take on Viera in mid-October, but the bout was canceled after the American fighter tested positive for COVID. A month later, the two will finally meet.

Tate has a much better pedigree than her opponent, but considering that she’s fought only one fight since 2016, we don’t know what to expect from her. Still, judging by what we saw from her second debut in the UFC, Tate has risen from the ashes.

She might not be able to knock out Viera as she did to Reneau in summer, but she could definitely record a win. If she does, she’ll probably win by points.