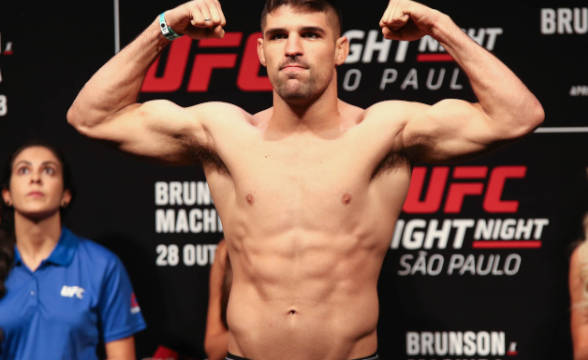 Scheduled for Saturday, August 6, UFC on ESPN: Santos vs Hill is a super-stacked MMA event with a number of exciting matchups on the main card. One of those is the welterweight fight between Vicente Luque and Geoff Neal.

In this post, we’re going to analyze the Luque vs Neal fight, dissect the betting odds, and share our top pick.

All odds are per FanDuel as of August 1.

Vicente Luque Favored by the Bookies

Now a 30-year-old, Luque has been fighting professionally since 2009. His overall record is 21-8, while in the UFC, he is 14-3. Each of his UFC losses happened by decision, including the one in Luque vs Muhammad 2 fight, which took place in Vegas in April.

Even though Luque landed more strikes than his opponent, the judges voted in Muhammad’s favor. As a result, Luque’s impressive four-fight win streak ended. The Silent Assassin now has a chance to get back to his winning ways by defeating Neal at UFC on ESPN 40.

Oddsmakers think he’s going to do it, giving the odds of -186 on Luque winning on Saturday. However, we don’t think Neal should be underestimated. After all, he’s the man who’s upset the odds several times in his MMA career.

Geoff Neal Hoping for an Upset

Neal is 14-4 in his professional career, with a 6-2 record since joining the UFC in 2018.  The bad news for him is that those two losses happened in his previous three UFC fights.

The good news is that he’s put an end to his losing streak in December by beating Santiago Ponzinibbio. Neal was a +110 underdog in that fight but was able to get a win, nevertheless.

In addition to Ponzinibbio, Neal has victories against a few other A-list UFC fighters, most notably Muhammad Belal.

Even though he’s sitting in the #6 position in the UFC welterweight rankings, Luque probably deserves to be a few spots higher. Getting a win over Neal (#13) would certainly help him climb the UFC ladders. Of course, it’s not going to be easy for him. We think the fight might even go the distance, but Luque should still get a win.