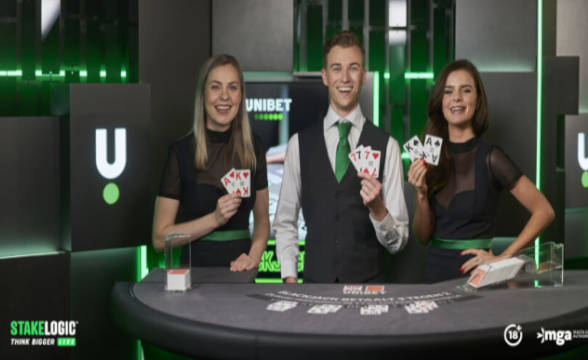 Unibet is set to become even more competitive in the Dutch gaming market by exploring a new live casino partnership that involves a branded and dedicated studio broadcasting environment.

Unibet Builds upon Live Casino Offer in the Netherlands

Since the July entry, Unibet has been able to secure a partnership with Stakelogic Live, focusing on the company’s live content. This partnership is now taking another turn as the companies confirmed that they will seek to expand on the collaboration by introducing a branded live studio in the Netherlands.

Stakelogic Live’s product offering has been welcomed by Unibet as it will now allow the company to better engage with Dutch players. To make sure the new studio project is realized according to the highest industry and player standards, the company has left Stakelogic Live to use its vast experience in the vertical to craft the new studio environment.

As a result, the Unibet-branded studio comes with a cutting-edge camera, broadcast technology, microphone, and dedicated Dutch dealers who will uphold the same standards their counterparts in land-based countries do and can keep players entertained.

Players will get to enjoy dedicated games developed by Stakelogic and experience a state-of-the-art live studio environment. The games featured at the studio include Auto Roulette, European Roulette, American Blackjack, and Auto Roulette Classic among others. Commenting on the latest successful collaboration between the two companies, Stakelogic CEO Stephan van den Oetelaar said:

We are thrilled to have strengthened our partnership with Unibet and to be powering its branded live studio. Our standard games have performed incredibly well for the operator so far, and this takes its live portfolio to the next level.

Van den Oetelaar said that Dutch players are always seeking out the best live casino experience and thanks to this partnership, Unibet can further establish itself as the go-to operator for live casino options.

Creating an Engaging and Entertaining Experience for Players

Kindred Group director of casino & gaming David Robertson hailed the partnership as well. He argued that the live casino segment has been very successful in the Netherlands so far and that a fully branded studio can only be a benefit for the company and the next logical step.

In Stakelogic Live, Robertson said, Unibet had a trusted partner with whom it could continue to build upon an engaging and entertaining proposition that is set to appeal to Dutch players. Unibet is committed to upholding the highest regulatory standards in the Netherlands.

A new study by Statistics Canada has established higher rates of gambling addiction in the Indigenous population of Canada and minors. According to the study, almost two-thirds of Canadians who are at least 15 years of age had gambled in the year leading to the survey data, with the rates of addiction growing among the […]