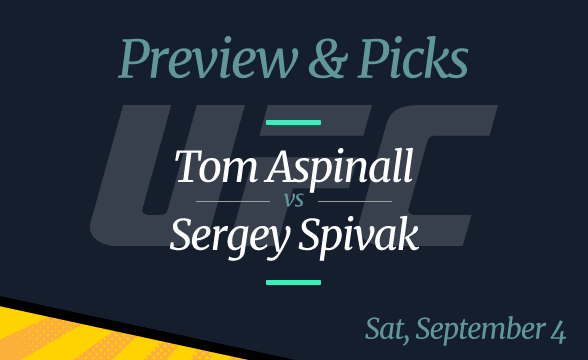 While many eyeballs will be on the Main Card in UFC Vegas 36 this Saturday, the co-main event between Tom Aspinall and Sergey Spivak will prove just as exciting to behold. Aspinall and Spivak have both plenty to prove with the fighters sporting a decent track record of 10-2-0 and 13-2-0 respectively.

The oddsmakers though have decided to side with Aspinall (-255) for this one against Spivak (+215). We dig deep into the available markets and detail each fighter’s chances of securing a victory in the Saturday bout with fortune smiling on Aspinall but giving Spivak a slight wink.

Odds to Win Aspinall vs Spivak

Where Is UFC Vegas 36 Aspinall vs Spivak Taking Place?

The fight between Aspinall and Spivak will be taking place on Saturday, September 4 in Las Vegas with the co-main card expected to start at 1 pm ET at the UFC Apex.

The (-255) doesn’t suggest that Aspinall will win at all costs. If anything, there is some room for speculation. The Englishman is 28 years old and he is in good shape with his 6’5″ height and 78″ reach.

With a track record of 10 wins, he ranks 11th in the heavyweight division and was posted at 224.5 lbs at his most recent weigh-in. Aspinall has been successful in securing five consecutive victories in his last five fights fought over a period of almost three years.

He has gone three-nil in his UFC finishes though, defeating Andrei Arlovski, Alan Baudot, and Jake Collier with KO/TKO and a single submission.

Aspinall is an explosive fighter who has plenty to offer to fans. He has been able to secure all his three victories in the UFC in under 1.5 minutes which is an impressive feat. His average time is just under a minute, too.

Tale of the Tape: Aspinall vs Spivak

The Polar Bear Is More Experienced

Then you have Sergey Spivak who is a better-seasoned fighter. With his overall 13-2-0, Spivak is listed as a moderate underdog at (+215). The fighter has had an almost impeccable record although he lost to Marcin Tybura back in 2019. Since then, Spivak has been on a tear clawing through Carlos Felipe, Jared Vanderaa, and Aleksei Oleinik most recently in July.

Physically, Spivak is quite prepared as well. He’s 242.0 lbs but shorter than Aspinall at 6’3″. They are matched in reach though with 78″. The difference in Spivak’s fighting style is that he takes longer to defeat his opponents. It’s just his style it seems and he doesn’t take unnecessary risks.

However, for Spivak to last against Aspinall he will have to find a way and lock down his early-fight aggression. Betting over/under on this fight seems reasonable. As to who may win in the end, we still want to say that is Spivak who has great odds on the moneyline, but Tom who has the upper hand.

ReportOn: Does the Industry Drive Enough Innovation in Responsible Gambling?