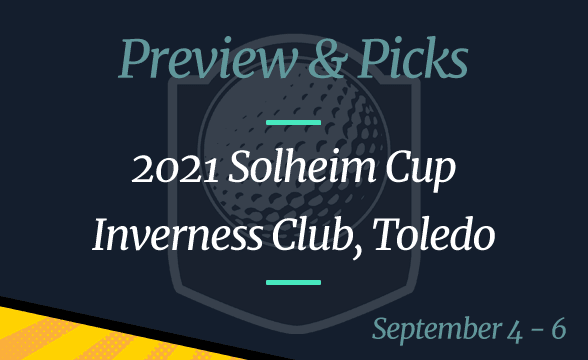 The all-women golf competition pitting America and Europe’s best golfers is back with the event set to run from September 4 through September 6. Once again, the favorites are Team USA with (-205) and Europe posted at (+169) at oddsmakers.

After the Americans suffered a defeat across the pond two years prior, they are back on home soil at the Inverness Club in Toledo, Ohio and this time it will be the Europeans making the arduous trek to the New World for a shot at the title.

Golf Channel and NBC will be covering the action and offer exclusive previews with a number of golfers looking to tee off and bring home the accolades of the Solheim Cup. Let’s have a quick look at the odds as seen by oddsmakers.

The Solheim Cup 2021 is taking place at the Inverness Club in Toledo Ohio, bringing the competition home to the United States. The first tee-off time is set for 7:30 am ET on Saturday, September 4 with the event broadcast on Golf Channel and NBC.

Why Is Team USA in the Lead?

When you look at the current ranking of players, the United States seems to have six top-25 ranked golfers based on the Rolex Rankings system. Conversely, Europe only has Anna Nordqvist to rely on. This doesn’t mean that the Europeans are incapable of throwing a surprise performance in what will be a highly-contested competition anyway.

However, the USA has quite a few great players, including Danielle Kang and the Korda sisters who will be joined by Lexi Thompson as some of the most capable players. However, Europe’s lack of prominence may just be their strength as a good performance maybe just a fluke, but then again, it may be a well-orchestrated strategy.

Team USA will have to play at their best and completely ignore the possibility of random chance. BetOnline does not offer tie odds, which is an extremely unlikely scenario, but other sportsbooks do. We recommend not counting on the tie odds too much and possibly bet on Team USA to win the Solheim Cup outright.

Solheim Cup Winners in the Past

Over the past five events since 2011, Europe seems to have the lead in terms of total victories. Many of these events came down to the wire with a single-point difference determining the victor of the event on at least two occasions.

While the US surely has the upper hand here, it makes a lot of sense to expect a similar outcome from this one. However, Nelly and Jessica Korda are already listed as the top scorers for the event with (+550) and (+1000) respectively, giving the United States a significant boost.

Betting on the outright winner may prove of little value to you, but finding the top scorers and backing them up with a wager could be just what you need.