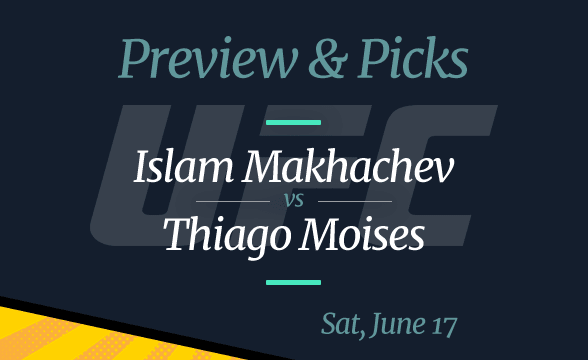 Makhachev is tipped to win the upcoming Fight Night bout on Saturday. Yet, for Thiago Moises, a defeat is not an option.

The upcoming UFC Fight Night clash between Islam Makhachev and Thiago Moises on the Main Card promises to be another spectacular showdown in the mixed martial arts community.

Makhachev is rightfully tipped to win the fight against his opponent, but the Saturday bout will be a pivotal moment in both fighters’ careers. The favorite has only lost once in his career so far with 19 wins, while Moises has suffered four defeats.

The odds reflect Makhachev’s strong position, setting the trend at -700 for the Russian and giving Moises +450 to win. We recommend staying tuned for more odds as we take a look at both fighters’ qualities and chances of success.

Where to Watch Makhachev vs. Moises?

Makhachev vs. Moises Preview – What to Expect from the Fight?

The lightweight division is one that is known for its dramatic comebacks, and Islam Makhachev is currently ranked ninth in the overall leaderboard. That makes him a dangerous fighter, to begin with. He is also riding a seven-fight winning streak, which adds to his track record and claim on Saturday’s fight.

Makhachev defeated Drew Dober in March via submission and is known for his strong career start in the UFC when he went 8-1 until his unfortunate defeat to Adriano Martins by KO/TKO in UFC 192. Makhachev has been working hard to make sure that this doesn’t happen again, and he definitely has the right company to do this.

A close friend to Khabib Nurmagomedov, Makhachev has taken it onto himself to become better. As a result, his wrestling and submissions skills are definitely remarkable. The only stopping point he has is through direct punches, but if he manages to catch up to his opponent, things change very quickly.

Then you have Thiago Moises. The Brazilian mixed martial arts fighter has definitely known a few hiccups in his career. Yet, Moises is still ranking 14th in the overall standings. His UFC standing isn’t too great, with a 4-2 total, but in terms of pure MMA fights, he’s looking at a three-fight winning streak.

While Moises’ overall track record is definitely worse, he too is a strong grappler, and that makes him a natural opponent for Makhachev, who will definitely aim to submit his opponent.

Tipped to win at -590, it’s hard to imagine another outcome for the fighter. Backing Moises to win outright on Saturday would yield a great result, though. However, you may extract better value if you bet on different conditions.

Will the Fight Go the Distance?

It’s interesting that no matter how strong the odds back Makhachev to win the fight, they don’t seem to back him in a close grappling action as much.

The reason is that Moises is skilled enough to use moves from a large arsenal to his advantage and potentially even diminish any edge Makhachev may have. While that is true, Makhachev does have Nurmagomedov as his sparring partner, so onlookers still seem to give him a distinct advantage over his opponent.