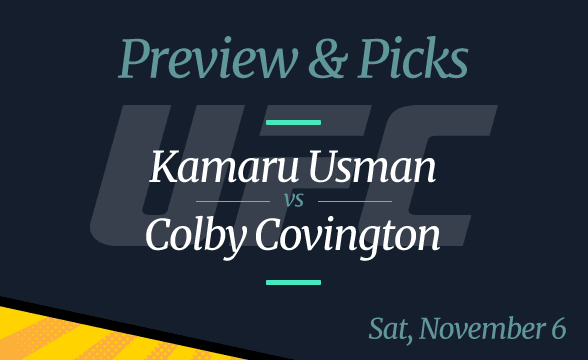 The UFC will be back at the Madison Square Garden in New York City, New York this Saturday and the event will feature the title bout between Kamaru Usman and Colby Covington, two great fighters, one of whom is given a strong chance of securing a victory here.

The event is UFC 268 and it will come with quite a few select bouts scheduled for the weekend so if you are looking for some quality MMA, that is your chance to get excellent action. There will be more fights you don’t want to miss out on and we will try to cover them all here briefly and to the point.

Namajunas will be fighting Zhang and Gaethje will walkout against Chandler. Stick around to find out more about the rest of the fights as well as the Usman vs Covington bout here.

Where and When to Watch UFC 268

Kamaru Usman and Colby Covington is one of the biggest fights this weekend and to be honest, in UFC this year. The pair are known to be less-than-flattering to each other in their verbal exchanges and this animosity makes for an interesting rivalry.

They previously fought in December 2019 and it was definitely one of the best fights we have seen. The rematch between the two is exciting given the UFC 268 odds which give Usman a clear advantage.

Both fighters are great wrestlers, though, so we won’t be expecting to see too many surprises when it comes to grappling. It will all come down to going the distance and pure striking power. Usman has been pumping up his punches a lot over the past few years, but Covington has had very few chances to actually fight and everyone, including sportsbooks, are a little short on info on what to expect from him.

Usman is definitely looking solid here, and there are several options we think you might want to bet on. First, the (-320) moneyline doesn’t offer too much value here, but if you want to include him on a parlay selection, you might. Alternatively, you could try to bet on the fight going the distance and Usman winning by decision.

Namajunas vs Zhang: What to Make of Them?

These two are fighting once again after Namajunas defeated Zhang back in April during UFC 261 with a KO. Zhang has been trying to catch up and Saturday’s event is where she either shines or falls behind as the perpetual underdog. The odds seem to suggest that she is not much behind, though as both Namajunas and Zhang are posted at (-110).

Even though Zhang made some serious changes to her training and overall exercising regime she is still not very likely to win after the previous fight. Namajunas had an octagon presence and a great defensive ability that parried most of Zhang’s advances and we think a repeat win is very likely. Zhang could avoid falling to a KO again, but we feel she will still lose this one by decision.

The rest of the fights on the ticket are also interesting. Gaethje will surely win the one coming up against Michael Chandler. Gaethje posts superior physical attributes as well and he excels at both wrestling and striking.

Shane Burgos at (-200) is definitely going to take out Billy Quarantillo (+170), but we would not be betting on this fight as we can’t see a true value here. Then again, Frankie Edgar (+145) is probably going to submit Marlon Vera (-165) and win this way.