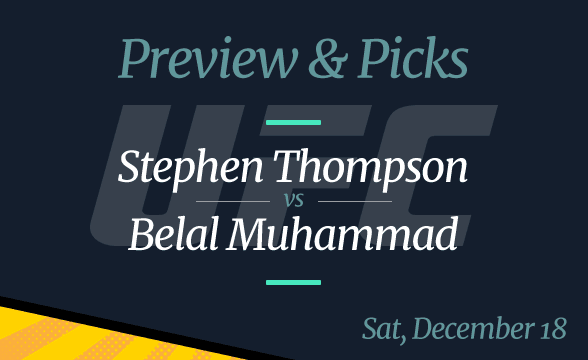 This coming weekend, Stephen Thompson is taking on Belal Muhammad in a welterweight clash that’s part of UFC Fight Night 199. This isn’t a title fight but is still super important for both fighters. The reason is that the winner would probably get a shot at the UFC Welterweight title, currently held by Kamaru Usman.

That said, neither fighter will lack any motivation in this bout. The question is who’s got the right skillset to win this fight? According to online sportsbooks, the answer is Thompson. Are they right to think of Wonderboy as the favorite? You better read our Thompson vs Muhammad preview to see what we think.

All odds are per FanDuel as of December 15.

Wonderboy Hoping to Get Back to Winning Ways

Stephen ‘Wonderboy’ Thompson is 3-4-1 in the UFC across the past five years. The latest bout he fought saw him losing to Gilbert Burns by unanimous decision. Before that, he won two straight fights by the same method.

In fact, more than half of his professional fights were decided this way. Are we going to see the same happening all over again? It’s very likely the fight will go the distance, but who will be crowned the winner?

Thompson will probably look to keep his opponent at a distance and look for chances via karate kicks. By going with this strategy, he should be able to win the judges over, something that he managed eight times in his career.

What needs to worry him is that his opponent is almost as equally good when it comes to fighting technical chess battles.

Thompson is currently fifth in the UFC Welterweight Rankings; Belal is in tenth place. However, Belal’s been fighting at a top level for several years now. In fact, he’s undefeated since January 2019, with five wins and one fight that was declared no contest after he received an accidental eye poke.

Belal’s professional record is 19-3, while his UFC record is 10-3-1. Among those ten wins are some that happened against some pretty tough opponents, most notably Demian Maia. However, Muhammad still hasn’t fought as highly-ranked fighter as Thompson. Does this mean he stands no chance on Saturday evening?

Who knows? Belal is a seasoned fighter, who knows how to tactically outplay his foes. Instead of rushing to KO his opponent, Belal prefers a less risky style. This explains why he finished most of his fights standing on his feet.

In fact, only one fight in his entire professional career (which started back in 2012) saw him getting knocked out. All the others were decided after the final bell.

The Thompson vs Muhammad should be no exception. The big question is can Muhammad upset the odds and get a win? It’s not going to be easy but stranger things have happened in the UFC.