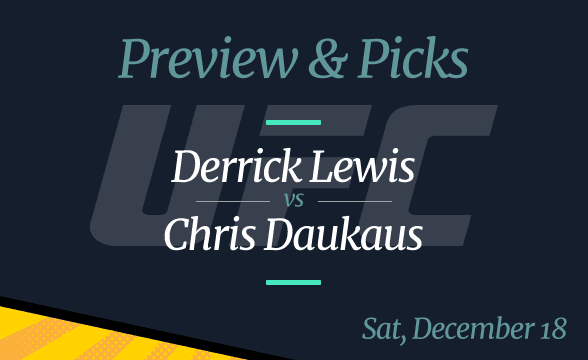 The UFC is back! This Saturday, we’re going to several interesting fights at UFC Fight Night 199, an event that will take place at UFC Apex in Vegas. The headliner fight is the clash between two heavyweights, Derrick Lewis and Chris Daukaus.

Lewis, who is the former title challenger, is currently in the #3 position in the UFC Heavyweight Rankings. His opponent is sitting in the #10 place at the moment. However, unlike Lewis who’s coming off a loss against Ciryl Gane, Daukaus is undefeated in the UFC. Is it time for his winning streak to end?

All odds are per FanDuel as of December 15.

Lewis to Rebound After Losing the UFC Heavyweight Title Bout?

With a career record of 25-8, Derrick Lewis is one of the best active heavyweights in the world. The 36-year-old has had two shots at the UFC Heavyweight title, missing both of those. The first UFC title bout of his career happened in November 2018 when he lost to Daniel Cormier.

In August 2021, he had another chance. This time, he was fighting with Ciryl Gane for the interim UFC Heavyweight Championship. Even though he had made a decent start in the bout, Gane destroyed him with punches in Round 3, which prompted the official to declare a technical knockout.

That was Lewis’ eighth loss of his career and the fifth that happened by knockout/technical knockout. Some four months later, he’s looking to bounce back with a win over Daukas. A win on Saturday would mean laying a foundation for what’s going to come in 2022.

Daukaus Wants to Stay Undefeated in the UFC

The 32 year’s old former police officer has all wins so far in his UFC career. The trouble with this is that he’s fought only four fights in this promotion. However, he earned the Performance of the Night accolade in three of those.

What’s even more impressive is that he won all those fights by KO/TKO even though he was fighting some seriously tough opponents, namely:

Thanks to his impressive performances inside the octagon, Daukaus is currently sitting in the #7 position in the UFC Heavyweight Rankings. Winning on Saturday could lift him a few spots up the ladder, which seems like more than enough motivation for him to give his utmost.

The trouble is that the fighting prowess is on the side of his opponent. Plus, Lewis has much, much more experience fighting at the elite level than him.