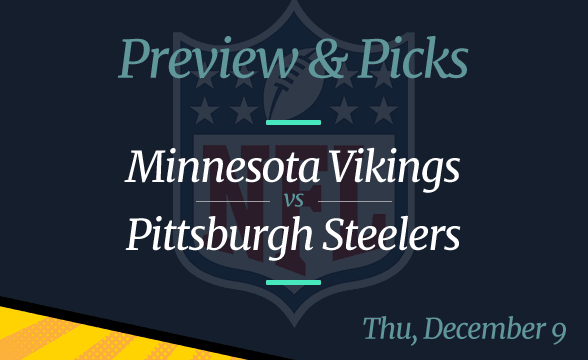 The Pittsburgh Steelers are coming to US Bank Stadium on Thursday night with their heads held high. The reason? They beat the favored Baltimore Ravens last week. The Steelers’ TNF rivals, the Minnesota Vikings, probably don’t feel very good about themselves right now. It’s because, on Sunday, they lost to the NFL’s worst team, the Detroit Lions.

Nevertheless, both Pittsburgh and Minnesota still remain in the contest for the Wild Card berth. The Steelers are now 6-5, while the Viking’s record is 5-7. Whoever wins on Thursday will get one step closer to the playoffs. So, who’s it going to be?

All odds are per FanDuel as of December 6.

The Steelers are Buzzing

After a series of disappointing results in November, the Steelers performed very well in their first December game. Last Sunday, they defeated the Ravens 20-19. It was a big comeback for Pittsburg whose players scored 17 points in the final quarter.

Their offense did okay – scoring 20 points against one of the best defensive teams in the conference is a job well done.

The Steelers’ defense was even better. In fact, their defensive players were the ones that brought the win to Pittsburgh. It was the final minute of the game and the Ravens have just scored a touchdown. Instead of going for an extra point, which would tie the game, Baltimore players decided to try a 2-point conversion.

Unfortunately for them, Pittsburgh’s defense outsmarted them, thus securing their sixth win of the season. The win has awoken their playoff dreams and achieving that goal doesn’t seem a mission impossible anymore.

The trouble, however, is that their schedule is going to get ugly after the Week 14 game with the Vikings. In the final four weeks of the regular season, the Steelers will have to take on the Tennessee Titans, Kansas City Chiefs, Cleveland Browns, and Baltimore Ravens.

As those are very tough games, the Steelers best shot at the Wild Card is to beat the Vikings on Thursday and hope for an upset in at least some of those four remaining games.

The Vikings Need to Rebound

They have a negative record, but they’re still in the competition for the postseason. The good news for their fans is that they have several seemingly winnable games before the end of the season.

For instance, they play two games against their divisional rivals, the Chicago Bears, who are among the worst teams in the league. They also play against the Green Back Packers in Week 16, who’ll probably get their job done by then.

On top of that, they also play against the Steelers on Thursday, a team that probably doesn’t have a better roster than them.

The bad news for Minnesota fans is that their players have been pretty inconsistent this season. We saw them losing easy games on many occasions in 2021, the most recent being the Week 13 game against Detroit, a team that was 0-10 before that.

Still, they seem to play well when it’s important. For instance, they beat their divisional rivals, the Packers three weeks ago. They obviously have the quality to beat the Steelers this Thursday, which is what we’ll probably see them doing.

Picks: Minnesota Vikings to win and cover the spread; over to hit