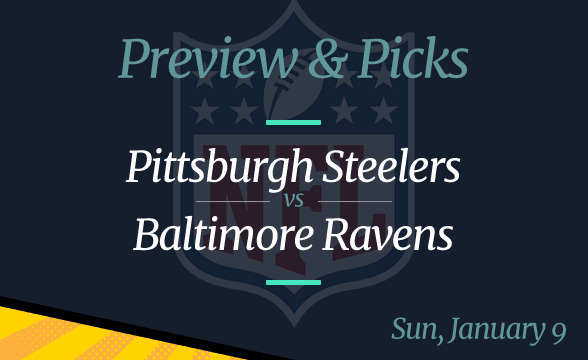 There are five AFC teams that have already booked their tickets to the playoffs. Another two slots are left, with five teams still in the contest. Among those five are the Pittsburgh Steelers and Baltimore Ravens, two AFC North rivals that will lock horns in Week 18.

The Steelers are 8-7-1, while the Ravens have an 8-8 record. The teams sitting in the Wild Card positions all have at least a 9-7 record, meaning that it’s not guaranteed that the winner of the Steelers vs Ravens will actually make the playoffs.

All odds are per FanDuel as of January 6.

On Monday night, Pittsburgh defeated the Cleveland Browns 26-14 at Heinz Field in what might be the very last home game for the Steelers quarterback Ben Roethlisberger. Big Ben who turns 40 in March threw for 123 yards, one touchdown, and one interception, helping his team stay in the playoff race.

Big Ben was okay in that game, but the man who really demolished the Browns was Pittsburgh’s outside linebacker, T.J. Watt. The 27-year-old has been sensational throughout the season, for which he’s now one of the top candidates for the NFL Defensive Player of the Year Award.

After a good start of the season, the Ravens are now in a horrible situation with five lost games in a row. The result is that they’re 8-8 on the season with only a tiny chance of getting to the postseason. For that to happen, they need to see the Indianapolis Colts lose to the Jacksonville Jaguars in Week 18.

The Steelers are in a slightly better situation as they could get to the playoffs not only if the Colts lost, but also if the Los Angeles Chargers played a tie with the Las Vegas Raiders. This is because the Steelers have a better divisional record than other teams competing for the remaining Wild Card entries.

This season, the Steelers won against two of their AFC North rivals. They defeated the Browns on two occasions and now have a chance to do the same with the Ravens. Considering that the Baltimore franchise is having serious problems with injuries, such a scenario seems very likely.

Speaking of injuries, the Ravens could be without two of their quarterbacks – Lamar Jackson (ankle injury) and Tyler Huntley (illness).

If they don’t play, we could see the Ravens suffering a blowout loss. However, even with one of them on the field, it’s likely that the Ravens aren’t going to do much better.

Picks: Pittsburgh Steelers to win; under to hit