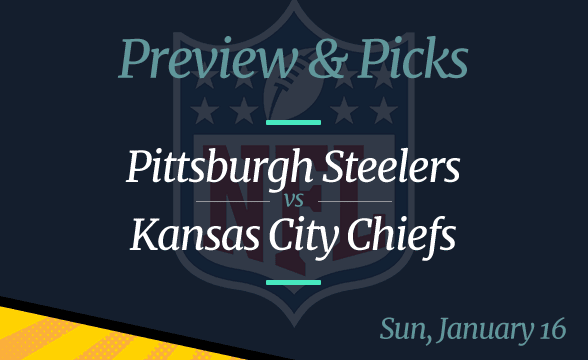 To make the playoffs, the Pittsburgh Steelers needed to beat the Baltimore Ravens in Week 18, as well as see the Indianapolis Colts lose to the Jacksonville Jaguars and the Los Angeles Chargers and Las Vegas Raiders not to play a tie. Literally, all those things happened on Sunday, meaning that the Steelers will get to the postseason.

Their opponent in the AFC Wild Card round is the Kansas City Chiefs, the team that finished as the #2 seed in the conference. The two have already met once this season – it happened in Week 16 when we saw the Chiefs winning 36-10 at Arrowhead Stadium. They meet again at the same place, but are we going to see the same scenario playing out?

All odds are per DraftKings as January 10.

Lucky Steelers Want to Upset the Odds Once Again

It’s safe to say that not many fans believed the Steelers would make the playoffs this year. However, they had luck on their side in Week 18. This goes particularly for the game between the Colts and Jaguars, which the team from Indianapolis was expected to win with ease.

However, a twist of fate brought the Jags their third win of the regular season, which paved the way to the postseason for the Steelers. Sure, the Steelers also had to do their part – beating the Ravens, who were also in the hunt for a playoff berth.

Finally, the Steelers also needed the Chargers vs Raiders game to not finish in a tie. And it almost did! It was 29-29 in the regulation, so the game went to overtime, where the Raiders won 35-32 thanks to two field goals.

Obviously, the Steelers were lucky to get to the postseason, but will luck follow them in Wild Card Playoffs? It’s unlikely, as their players are just not good as those playing for the Chiefs. This goes especially if you compare their offensive teams.

Led by 38 years’ old quarterback Ben Roethlisberger, the Steelers scored a total of just 343 points in the regular season. We say “just” because that’s the least number of points scored of all the teams that made the playoffs.

A “Pseudo Bye” for the Chiefs

Even though their overall record in the regular season is 12-5, which is the same as the Tennessee Titans, the Chiefs finished in the second spot in the AFC Standings. As a result, they do not get to skip the first round of the playoffs. Instead, they get to play the Wild Card Playoffs against the lowest-seeded team from their conference.

The team in question is Pittsburgh, which Patrick Mahomes and Co. beat in Week 16 without any problems. It was 36-10 in that game, which was one of Kansas’ best performances of the season. In fact, we saw them winning only two games by a larger margin.

It seems that they love playing against teams like Pittsburgh. The reason is that Kansas’ strongest weapon is their offense. Proof of this is that they scored 480 points in the 17 regular-season games, the second-best in the AFC.

Still, this doesn’t mean the Steelers aren’t going to try. On the contrary, we’ll probably see them giving their utmost on Sunday.

Picks: Kansas City Chiefs to win but not cover the 12.5-point spread; over should hit