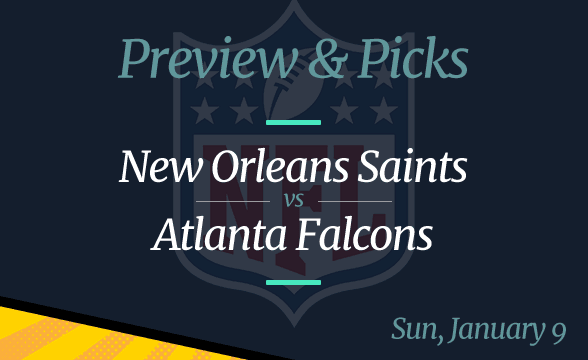 Can the New Orleans Saints get to the postseason for the fifth season straight? We’ll find out the answer in Week 18 when they play against the Atlanta Falcons at Mercedes-Benz Stadium. Winning in Georgia is a must for the Saints, but even that isn’t enough for them to book the ticket to the playoffs. They also need to see the San Francisco 49ers lose the same day.

The Niners are currently sitting in the last available NFC Wild Card position, but they’re taking on the mighty Los Angeles Rams in the final round of the regular season. What this means is that with a little bit of luck, a win over the Falcons would be enough for the Saints to qualify.

All odds are per FanDuel as of January 3.

A Must-Win Game for the Saints

Winning on Sunday doesn’t automatically mean a playoff berth for the Saints. However, if they lose, they will know their playoff future straight away – a loss on Sunday afternoon means the end of the Saints’ 2021-22 campaign.

That said, you can be positive that the Saints are going to be 100% motivated to win in Week 18. Apart from motivation, they also have confidence on their side. It’s because they’re coming to Atlanta after a relatively easy win over the Carolina Panthers.

The score was 18-10 for the Saints, whose starting quarterback Taysom Hill made a comeback after missing the Week 16 game against the Miami Dolphins, which his team lost 20-3. He missed the game with a finger injury, but that’s all behind him now. Last Sunday, we saw Hill throwing 17-for-28 for 222 yards and one touchdown.

Atlanta Has Nothing to Fight For

The Falcons have only one win fewer than the Saints, but even if they manage to win in Week 18, they will not make the playoffs. The reason is their loss in Week 17 to the Buffalo Bills. If they had won that game, they’d be now playing for a postseason berth.

This way, they have literally nothing to fight for. Plus, their players probably feel disappointed after last weekend’s defeat, in which they lost 29-15, with one of their touchdowns being reversed.

With their morale being low, the Falcons probably aren’t going to put too much of a fight against the Saints. Instead, we will probably see an easy win for the visiting team.

Picks: New Orleans Saints to win and cover the spread; under might hit

The Pennsylvania Department of Drug and Alcohol Programs, the Pennsylvania Gaming Control Board, and the Penn State University released a new report on Friday, looking into the rate of gambling participation in the Keystone State. Pennsylvania has embraced gambling in all of its variety, from sports to casinos, poker, and racetracks. This has created a […]