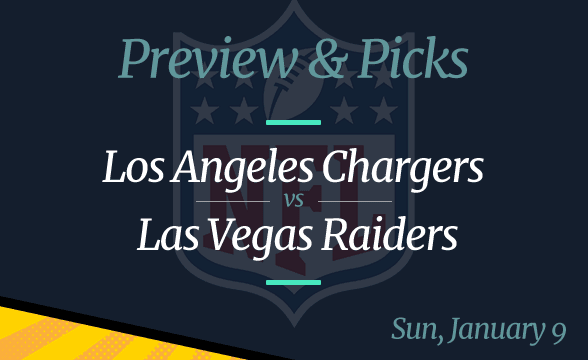 Placekicker Daniel Carlson scored the last-second field goal against the Indianapolis Colts in Week 17, thus bringing the Las Vegas Raiders the much-needed win. Thanks to that victory, they now have a win-and-in scenario before them – if they beat the Los Angeles Chargers, they will qualify for the playoffs.

Unfortunately for the Raiders, it’s pretty much the same situation when it comes to their opponents. The Chargers must not lose on Sunday evening if they wish to get to the postseason.

All odds are per FanDuel as of January 3.

The last time the Chargers’ played against their AFC West rivals, they won 28-14. The win over the Raiders was one of 13 games in 2021 in which we saw the Raiders scoring over 20 points.

What’s even more impressive is that their offensive performances seem to be improving all the time. For instance, their scoring average over the past five weeks is 33.8 points per game.

Unfortunately for the Chargers, their defense hasn’t been as impressive as their offense. This team’s conceded a total of 424 points in 16 games, which makes them one of the four worst defenses in the conference.

The most worrying thing is that we’ve seen them conceding 20+ points against teams that aren’t famous for lethal offenses. For example, the Chargers conceded 41 against the Houston Texans two weeks ago.

In-For Raiders Determined to Get to the Postseason

If they win on Sunday evening at Allegiant Stadium, the Raiders will qualify for their first postseason since moving to Vegas. It’s also going to be only their second playoff appearance since 2002.

The trouble is that beating the Chargers isn’t going to be easy. Sure, they will have their fans to support them, but the team from Los Angeles is likely to put on a good fight. On the bright side for the Raiders, they’ve been playing top football lately, which is certainly making them optimistic ahead of the big game.

They’re coming into the decisive clash after three straight wins. The teams they won against are the Cleveland Browns, Denver Broncos, and Indianapolis. When the Raiders played against them, each of those teams was still in the playoff race.

The Chargers, however, didn’t win those games easily. In fact, they won each of those by less than one touchdown.

This explains why the oddsmakers don’t think of them as the favorites in Week 18. Still, despite being the underdogs, they could cause an upset. And even if they don’t end up winning, it’s very likely they will cover the spread.

Picks: Las Vegas Raiders to win; over to hit