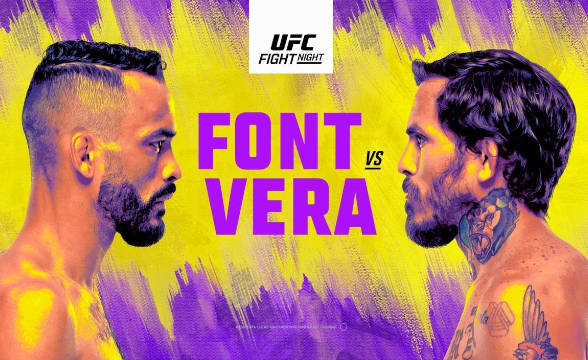 Rob Font (19-5) and Marlon Vera (18-7) lock horns this Saturday in the headliner fight of UFC on ESPN 35. Font, who is ranked fifth in the UFC bantamweight rankings, is the betting favorite, although the odds aren’t miles apart. His opponent is currently sitting in the #8 position, which is proof that he’s an elite fighter. That said, anything can happen in this bout.

Font Looking to Bounce Back After a Loss in December

After four straight wins, Font’s surge came to an end last December when Jose Aldo beat him by unanimous decision. It was only his fifth loss ever, which makes Font one of the best fighters in the division.

Not only does he have an impressive record, but he also has experience with fighting big bouts. This guy’s fought some real legends of the sport – Sergio Pettis, Cody Garbrandt, and so on.

Knowing this, you can be sure that the fight against Vera doesn’t scare him. Still, he needs to take this bout seriously, as his opponent is coming off a couple of amazing performances.

Surging Vera Hoping for Another Win

Marlon Vera’s most recent fight saw him knock Frankie Edgar out, earning himself a Performance of the Night bonus. It happened last November, while in June, we saw him beat Davey Grant in a fight that was crowned the Fight of the Night.

Those two wins have put Vera in the spotlight. Although he’s not yet a contender, we could see him challenging the title in the future. Of course, that can only happen if he continues to win. It’s not going to be easy to defeat Font, but stranger things have happened in the UFC. In fact, this guy has already defeated some major favorites in his career. Maybe he could beat another one on Saturday?

Rob Font is the favorite for a reason – he’s a fantastic fighter with plenty of experience. However, Marlon Vera mustn’t be underestimated. We’ve seen him put on some really impressive performances in recent times, against some top-class fighters. Priced at +105, Vera does look like a great bet.