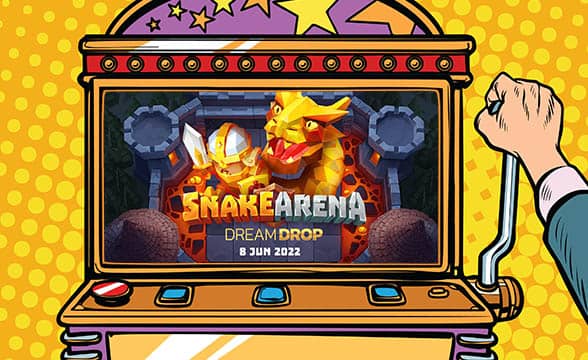 Online gaming supplier and aggregator Relax Gaming decided to revamp its highly-praised Snake Arena slot from 2020. The game received a nice makeover with a Jackpot Spin and a Dream Drop Bonus at the center.

Get Ready for An Epic Knight VS Giant Snake Battle

Ever since it first saw the light of day back in 2020, Snake Arena became a player favorite across a large variety of worldwide markets. Relax Gaming decided to seize the opportunity in 2022 and hit the refresh button on the game. The developer added some cool new Dream Drop symbols, a Jackpot Spin round, and a mouth-watering Dream Drop Bonus.

The new game that features a 5×5 grid and 30 pay lines brings a giant wheel into the spotlight. The wheel consists of five different types of jackpots that have the potential of adding extra jackpot prizes to the action on the reels. Once the game starts, players get to immerse themselves straight into the epic battle between courageous knights fighting a massive serpent. The result? A highly volatile experience summing up wins that can reach 2758.8x the original bet.

The wild symbols within the game are represented by the knights and the snake. Every time both of these symbols land at the same time on the reels, the Free Spins round is activated thanks to the innovative mechanics part of the revamped version of the game. During the free spins round, the serpent is seen chasing the knight in an attempt to eat it, gradually growing in length with each new catch. When the snake eventually eats itself, the Free Spins round is brought to a stop. If your knight defeats the snake, you receive the maximum representing 1000x the bet.

The game also comes with the Wild Chase feature that can occur at any given moment within the game. This feature triggers the battle mode, turning the entire reel into a wild. In battle mode, the snake is seen on top of the reels while the knight shows up at the opposite end of the grid. Whenever the two land on the same reel, a fully expanded wild pops. This allows players to bring one to five extra expanded wilds on other reels.

Coming across five Dream Drop Bonus symbols triggers the Dream Drop Bonus and allows players to spin on the giant wheel for a chance to scoop up one of the five available progressive jackpots: Rapid, Midi, Maxi, Major or Mega.

Relax Gaming’s chief product officer Simon Hammon described the game as one designed “from the ground up to get hearts racing”. He added that the brand new Dream Drop Jackpots is expected to turn the slot into a “truly thrilling experience”.

At the end of May, the company launched Midnight Marauder, a high-volatility slot game with an innovative Collect & Multiply mechanic rewarding players with up to 30,000x the bet. During the same month, Relax also partnered with Stakelogic Live for a distribution agreement.